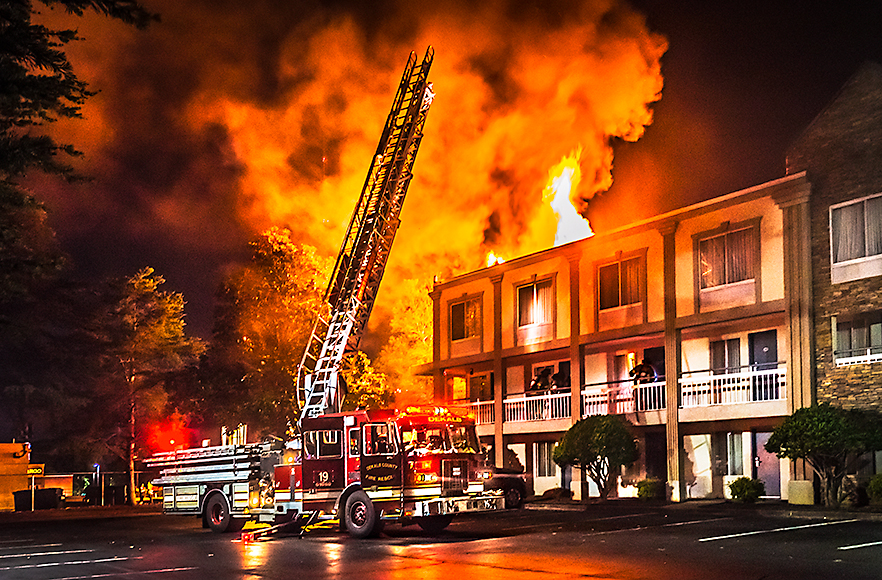 My hotel caught on fire a few nights ago. Everyone got out ok. I freaked because I had just gotten out of the shower and some guy started trying to kick my door in and I was scared to open it. Then I realized he was yelling, “Fire!”

I couldn’t find Cowboy’s leash. People were running and yelling that the building might explode. I don’t know how I did it, but I yanked all 65 pounds of him up and ran to the car, threw him in and realized I was standing in the parking lot in just a T-shirt and panties. I saw that the fire was on the opposite end, so I ran back and got dressed and got my laptop and camera.

I was ok until we were all standing in the parking lot across the street and the police were taking names and checking us off a list and they were bringing people water and blankets. I had gotten Cowboy and my stuff and everything was fine. I had taken some pictures, just on autopilot, like I was covering it for the paper or something. The fire was mostly out. It looked much worse than it was.

That’s when I started crying.

The DeKalb County Fire Department works the scene of a two-alarm fire at Quality Inn on Ranchwood Drive in Tucker, Georgia, June 4, 2014. The fire was reported at approximately 11:30 p.m., and 55 guests were evacuated with no injuries. Several rooms on the third floor were damaged by the fire, which is believed to be suspicious in nature and is currently under investigation. (Photo by Carmen K. Sisson/Cloudybright)