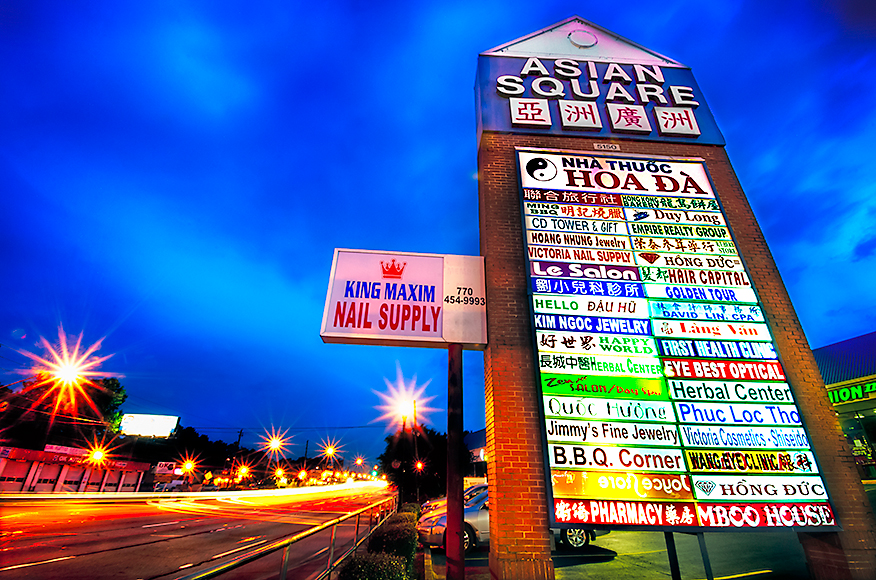 I’ve been in Atlanta for the past two weeks, shooting pictures for the DeKalb County Convention and Visitors Bureau, and it’s been a lot of fun.

One of the more interesting places I’ve photographed is Asian Square in Doraville.

People talk about how multi-cultural Atlanta is, but DeKalb County — which only contains a portion of Atlanta — is a true melting pot. More than half the people speak a language other than English as their primary language. And Buford Highway, where this photo was taken, is the cultural mecca of it all.

The first night I stumbled upon Asian Square, I was overwhelmed. I was hungry and there were hundreds of restaurants crammed into strip malls, spilling over street corners and rambling up hillsides like neon roses. (I know, bad analogy.)

At first it looked like too much of everything. Too many people. Too much light. Too much noise. Too many signs. Too much confusion. But the more time I spend there, the more I like it. It’s a happy place, popular with the younger set.

I spent several nights trying to make this image, and every night, the same thing happened — a car slowed and a boy (or group of boys) rolled the window down to watch as I held vigil over my tripod, shooting 30-second exposures of traffic.

In any other city, that might be a cause for alarm at 3 a.m., but not here. They all just wanted to ask the same two questions: “Is that a Nikon?” and “Are you shooting a long exposure?”

And every time, I ended up in a big photography discussion with my fellow enthusiasts.

This was a fun image to make, not only because it turned out exactly the way I wanted it, but also because the people I encountered along the way were so nice. The language barrier was evident, but so was the shared passion for craft and mechanics.

I’ve always been a proud Nikon user, but never more so than while I was shooting in Asian Square.

On a final side note, a boy of about 16 told me he had a Nikon. Then he whispered conspiratorially: “But as soon as I can, I’m going to buy …. a CANON. My grandmother says if I do, I can’t bring it in her house.”

Traffic passes Asian Square in Doraville, Georgia, May 29, 2014. The city was incorporated in 1871 to meet the needs of the farming community. Today, Doraville boasts one of the largest Asian populations in the country and is home to many Latin American immigrants. Of the 8,330 people living in Doraville at the time of the 2010 Census, 56 percent listed a language other than English as their native tongue. (Photo by Carmen K. Sisson/Cloudybright)