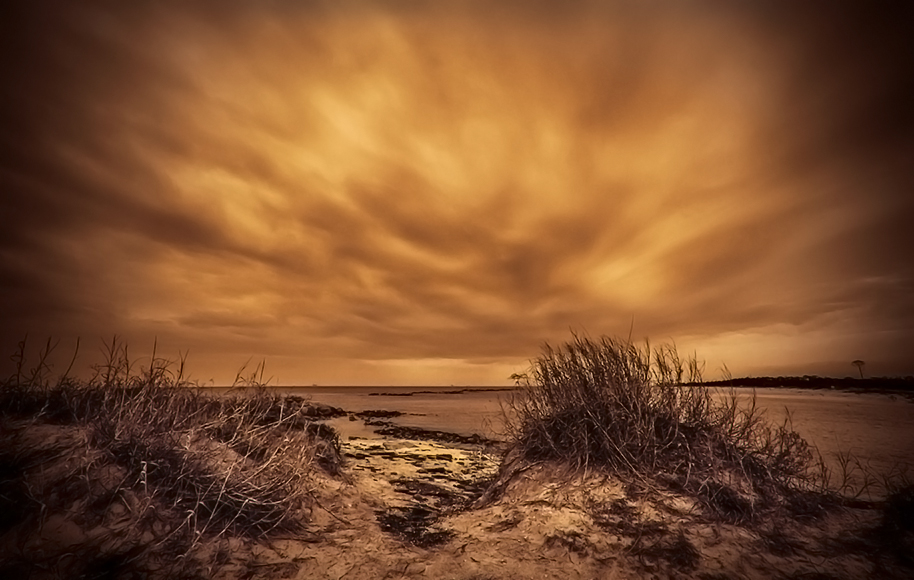 The tobacco washed skies reminded her of him, and it irritated her, this sudden penetration of inner sanctum. She had held his letter for days, pressing the sealed flap against her lips, tasting all she had vowed to forget.

She had said go away, not because she wanted him to leave but because she knew he would not stay. But then, trouble never does stay gone for long, and that was what this was — trouble.

He had once called her trouble, and he was right.

The beach was empty today, and she walked in bare feet, ignoring the cold water sucking at her toes, ignoring the sharp rocks and shells and bits of flotsam and jetsam from other people’s broken lives.

Trouble. With a capital T.

She fingered the letter in her pocket. What was he seeking? Friendship? Forgiveness? Gratitude? Mercy? He had not left her with much to give. His brand of trouble was a scorched earth diplomacy. Nothing remained.

Nothing but the taste for trouble and just enough loneliness to smooth the rough edges.

And now, a letter. Sealed with honey, filled with poison.

That was what she told herself as she walked along the beach. She had not invited trouble, but it had found her, and she had welcomed it with the desperate clutches of the dying at a desert oasis. Even water can kill in excess. She had known this but had not cared.

And now trouble came calling again, selling a promise down the river without a return ticket upstream.

She held the letter and stared at the Gulf until the horizon was erased by a starless night. And finally, when it was time, she walked to the water’s edge with the surety of the damned.

Note: This is a work of mostly fiction. Any coincidence with real life people, places, or situations is more or less unintentional.