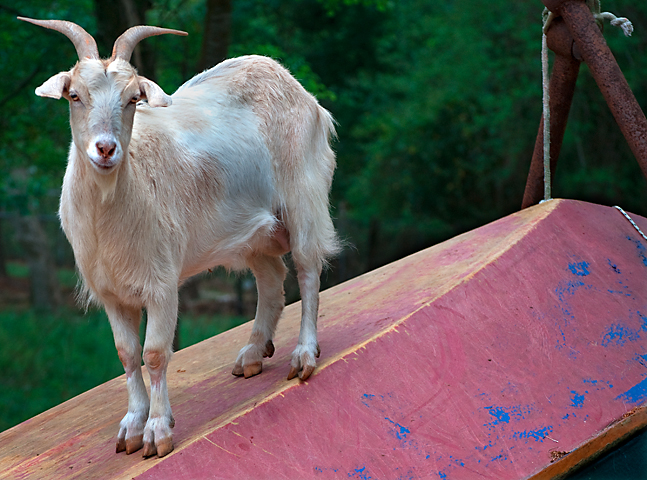 The wonderful thing about the South is you’re never very far from something weird, wonderful, or simply amazing. It doesn’t matter whether you’re strolling the streets of downtown Birmingham or taking a side road through the Mississippi Delta, you’re best off bringing your camera, because chances are, you’re going to see something you want to capture and bring home to show your friends.
If you have friends from “other parts,” this is even more fun, because what’s quaintly odd to you is likely to be downright comical to them.On the afternoon this photograph was taken, I expected a routine trip to the veterinarian to pick up flea treatment for Cowboy. It was cloudy, and rain threatened to burst from the sky at any moment. I didn’t feel like going, but he was miserable, and so I made the drive.

When I pulled into the parking lot, I saw Nilla. She was magnificent, perched atop her maritime mountain, and I — having been a city girl for far too long — was riveted. She didn’t seem to mind the intrusion, and after a while, her mate, Sir Stankalot, and their kid, Brownie, came to say hello as well.

An ordinary errand on an ordinary day, but it made me smile just the same.

Nilla, a pygmy goat, stands on an overturned boat March 29, 2011 at Duke Animal Clinic in Mobile, Ala. Nilla lives at the animal clinic with her mate, Sir Stankalot and their offspring, Brownie. (Photo by Carmen K. Sisson/Cloudybright)