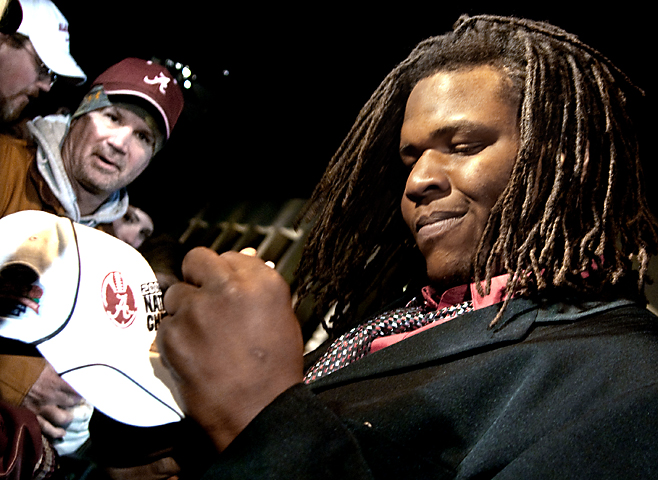 Alabama fans are a devoted bunch. Temperatures in Tuscaloosa hovered at 20 degrees last night, with the windchill dipping to 13, but thousands gathered at Tuscaloosa Regional Airport and the Mal Moore Athletic Facility to greet the team when they flew in from California.

Fans were disappointed when players trudged into the building without coming to say hello or even acknowledging their presence, but nose tackle Terrence Cody signed everything from cell phones to caps, thrilling fans and giving me the chance to shoot this image for Associated Press.

In other news, my car was burglarized Thursday night. Goodbye, iPod and GPS. I loved you both.

University of Alabama nose tackle Terrence Cody signs an autograph for a fan Friday, Jan. 8, 2010 in front of the Mal M. Moore Athletic Facility in Tuscaloosa, Ala. Football fans stood in line nearly two hours, braving 20-degree temperatures and a windchill of 13 degrees, in order to greet the team upon their return from Pasadena, Calif. Alabama defeated Texas 37-21 Jan. 7, 2010 in Pasadena to capture the BCS National Championship.  (Photo by Carmen K. Sisson/Cloudybright)