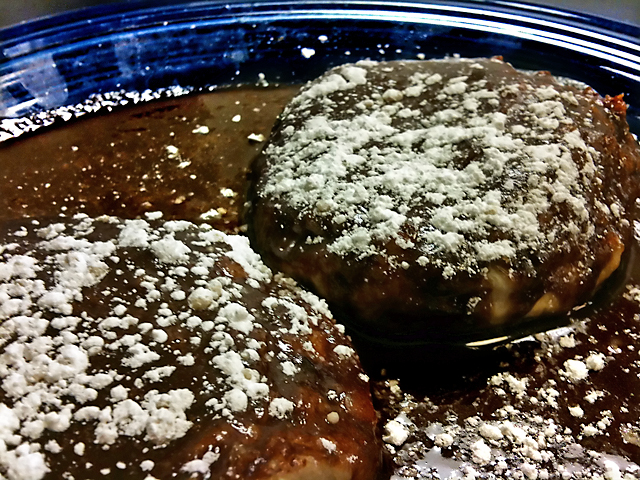 Only in the South

Nothing says Saturday morning like a heaping plate of sugar. Begin the day with two hot buttered biscuits drowning in a rich, viscous chocolate goo and you’re set to conquer the world — or at least downtown Huntsville.

This is the first trip I’ve taken since I traded my BlackBerry for an iPhone, and I’ve put it to good use. User-centric Yelp has been useful for finding stuff to eat and things to do with real-life reviews from ordinary people who aren’t afraid to say things like this: “The experience was so horrifying, I still wake up in the middle of the night and cry about it.” And: “The decor is kinda hospital cafeteria meets Clockwork Orange. Really sort of unsettling.) Note to self: Skip Shogun Japanese Steakhouse and Ketchup.

But the reviews for the Blue Plate Cafe were spot-on. Overall, Huntsville has been a great experience. The people here are rocket scientists — literally. The city is clean, albeit somewhat post-modern sterile, and my hotel is fantastic. I wish I lived here. Actually, some people do. There are washers and dryers downstairs, and my room has a real stove and full-size microwave, refrigerator, and dishwasher. No traipsing down a dark corridor in the middle of the night, only to discover the ice machine is broken either. Instead, at 2 a.m., I padded down the carpeted hallway and took the elevator down to an in-house convenience store. Snagged a Hershey bar with almonds, noted the price and my room number on a piece of paper, and dropped it in a box so it could be added to my bill. They charge by the honor system.

It’s been good for Cowboy as well — after he overcame the initial terror of the elevator. Now he rushes to it, leaps inside, and patiently waits for the doors to open and take him outside, where a grassy field awaits his morning ministrations.

My story is going well, too. Had the pleasure of spending yesterday afternoon with a nice family and will spend this afternoon shooting photographs and taking a few more interviews. Then it will be time to come home. Before I do though, I think I’ll have the cocoa biscuits one more time.

Cocoa biscuits, buttermilk biscuits slathered in chocolate gravy, are a regional favorite at the Blue Plate Cafe in Huntsville. The dish, made with flour, cocoa powder, and sugar, is more of a dessert than breakfast fare and is usually confined to the South and Appalachian regions of the United States. (Photo by Carmen K. Sisson/Cloudybright)