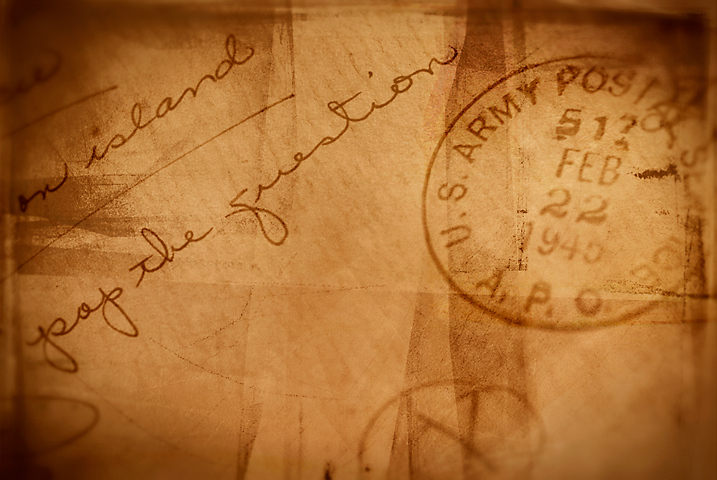 The screen door is open, gusty winds blowing a soft, gentle rain as I lay the first letter on the table. 1945. At least half of the 250 letters are mailed from Belgium. I sit on the floor and read some of the letters. They’re sprinkled with humor, warmth, and the usual complaints you’d expect from the front line of WWII.

“You teach me to dance, and I’ll teach you to shoot a rifle,” the Navy sergeant writes to his wife in one of the letters. “I’ll be perfectly satisfied to sit and read to you at night.”

He tells her how he lies on his cot to write his letters. How jealous he is that she danced with another man. How he imagines her sometimes in “that green dress, you know, the ONE.” He tells her he spent the night vomiting, and he wished she had been there — he’s quite sure he would have been restored immediately to health and vigor. He tells her not to be alarmed, but when he comes home, he’s going to be “quite the jack rabbit” for a while. He tells her she should rest, because she will get precious little sleep. He tells her he loves her. He misses her. He still remembers her touch from his last visit home. He tells her he can’t wait to see her again.

He was a prolific writer, and each letter tends to be at least two to four pages long, so if I decide to write a novel about this wartime couple, it will take months. Possibly years.

A part of me wants to know how it all turned out. Did he make it back home? Was she waiting? Did they live happily ever after?

But I’m not certain I want to uncover the answers. The intrigue lies in imagining dozens of endings to their story. There are things that aren’t meant to be known. Things that lose their magic when dissected by a writer’s pen. Things that silently nourish the soul without need to be spoken.

I don’t want to know why the sky is blue or where the sun goes when it sleeps. I don’t want to know what gives the wind its breath or makes the stars so bright. I want to stand on my porch and watch the trees bend and sway. I want to walk in the rain and feel it sliding down my cheeks, slipping under my collar. I want to run wild beneath the moon and count the falling stars. I want life to be a mystery, guided by serendipity instead of science, fed by wishes instead of food.

Music: So Far So Good by Thornley (lyrics)