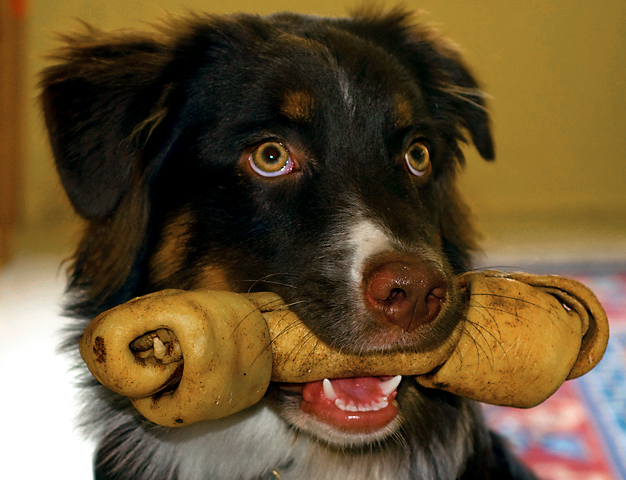 The things he loves, part 2

Cowboy has become obsessed with bones. It’s odd to me, to see him do this quintessential “dog” thing. It’s not that I forget he’s a dog, it’s more that he doesn’t do a lot of the typical dog-like things. He’s not a barker, which is nice. One or two short barks for attention. Low chuffing followed by furious barking if anyone approaches — that’s barking I can handle and appreciate. I rarely fear someone crossing my property line without me knowing it.

He likes to dig holes, likes getting muddy, loves a belly rub, and goes crazy for popcorn. He’ll whine like the world is ending if I shut him away from me, and he’s always up for a car ride, hanging his head out the window and reveling in the wind in his face. Going outside makes him crazy mad with excitement, nothing is safe on the floor or in the garbage can, and he could play tug all day long.

But he’s grooving bones hard right now. I buy him something almost every time I go to the store, and on impulse one day I bought him a big beefy bone at Walgreens. It was the width of my wrist and about 11 inches long. I thought it would keep him busy a while, and it did. At first, he kept circling it, barking at it, but when he realized he could lie on it and hold it in his paws, stripping the meat, he warmed to it quickly. It occupied him all afternoon and gave me some much needed writing time.

When he was finished with that bone, I bought him one made of rawhide. The one in the picture is his second rawhide bone. The end part of the first one is lying on my front porch, abandoned. He spent all week chewing and licking and chewing until he finally ate it all. I rarely saw him without it. He brought it to bed with him at night, he shoved it in my hand while I was peeing, he poked me in the head with it to wake me up. He liked it a lot.

He seems less keen on this bone. I’m not sure if I bought a different brand or if he’s just bored with it after spending all week with the other one. He carries it around, but he’s shown no interest in eating this one. I’ve seen him scratch at the carpet in a pathetic attempt to bury it. I hear it clunking to the floor all day long as he carries it a while, then drops it. If he doesn’t start eating it soon, I think I’ll give him the meaty bone I’ve been saving.

Nevertheless, even if he doesn’t eat it, there’s something poignantly beautiful to me when I see him walking down the hall, bone in mouth, looking like the grownup boy he’s becoming. Smitten? Hell yeah. I’m a goner, and that’s fine by me.