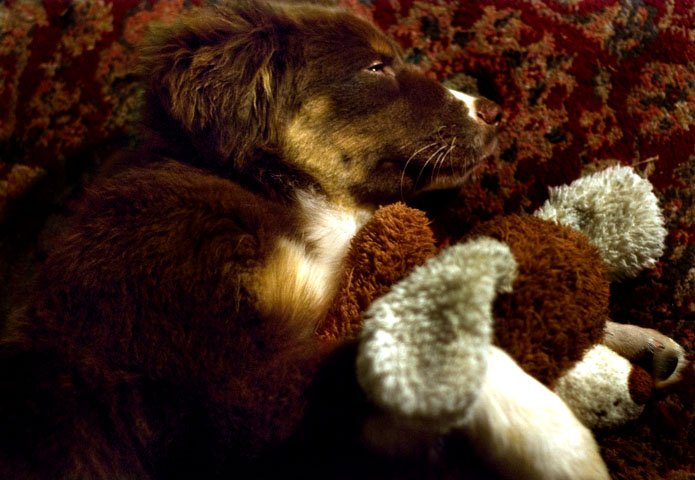 The things he loves, part 1

I’m sorry for all the dog shots. I’d considered starting a separate blog to record Cowboy’s life, but this blog is a record of my life, and as such, Cowboy is a big part of it right now. I tend to take things seriously. Once I’ve made up my mind about something, I embrace it fully, and I rarely change my mind again. I’m hard-wired to be fiercely loyal, to give myself over one cell, one atom at a time. I’ve given my heart to a dog, and it only took 13 days.

His education is of primary importance to me right now, and I’ve already gone through a series of methods, from the recommendations of the Monks of New Skete in their book The Art of Raising a Puppy to the suggestions of professed Dog Whisperer Cesar Millan. Neither satisfied my desire to build a firm, yet loving relationship with my dog. Both methods are too harsh. They suggest alpha rolls, where the owner rolls the puppy over on its back and stands over it, not relinquishing until it struggles and squeals. They suggest cuffing them under the chin for misbehavior, holding their muzzles closed until they whine, and denying them attention except for under your terms, when you feel like giving it. These techniques were breaking my beautiful puppy’s exuberance, making him respect me, yes, but through fear, not love.

I will never have a pet of mine cower before me. Of course I want him to be well-behaved and a positive member of society. I also want him to be my companion, not because he has to but because he wants to. So I’ve changed over to clicker training. The basic premise of clicker training is this — I give Cowboy both a verbal and visual command. When he fulfills it, I click the clicker and deliver a treat. If he doesn’t obey, he doesn’t get the treat. There are no further repercussions. I walk away, return, and try the command again. If he continues to fail, I step back and re-examine my technique. He’s smart and eager to please. His shortcoming is my failure, not the opposite. He’s learned to sit pretty well, and most of the time, he will jump in the car on a “Saddle Up” command. He understands “No,” but most often gets a gleam in his eye and tries harder.

He’s a brash, confident dog, and he takes a reprimand as an excuse to act out and defy authority that much harder. It’s far more effective to leave the room for 30 seconds, standing just outside the door. Immediately, he begins to whine and cry. At the end of 30 seconds, I return, pet his head, and speak kindly to him. I love him, but I dislike the behavior. There’s a difference.

The biggest problem we face at the moment is biting for attention. He hates to be ignored, so he often nips at my hip or ankles so I’ll look at him. In the past, I’ve played with him to make him leave me alone. This only reinforces bad habits. He also has a habit of grabbing shirt tails, yanking clothes from my hands as I’m dressing, and snatching my underwear from the clothes hamper and running through the house with it. I’m learning to become a statue at these moments, to stand still and neither give in to his bid for attention nor call “No,” which in its own way is still a positive reward for negative behavior.

There’s a lot of psychology to this dog raising thing, and I like that. It’s like having a two-year-old, and it’s trying, exhausting, and exhilarating at the same time. I’m always grateful when people volunteer to wear him out for me, because I’m often wiped out by the end of the day, with nothing more to give.

This evening, my friends Dan and Ginger (also known as Rev and LE), invited Cowboy to Northridge High School to play on the soccer field. It’s a great source of amusement to them that I refuse to allow him to play off-leash except in fenced areas. In some ways, it’s frustrating. They tease me about being over-protective. About coddling him too much. When I turn my back, they set him free. He stays with them, and as they’ve pointed out, he hasn’t died yet, but the parent in me knows my dog. He’s young and impetuous. He’ll chase a leaf, a can, a butterfly, and he won’t look where he’s going. He’ll get absorbed with his play and not return.

I’m torn between not wanting to look like a strict parent and wanting to protect my child. It’s a tough position to be in. Ginger’s dog is a calm breed, and he tends to look zonked out on Valium most of the time. My dog bounces off walls and springs three feet into the air, doing somersaults and racing in tight circles around and around until he finally falls down. My dog is more dynamo than dullard.

As the days pass, his personality becomes more honed, more defined. He loves bacon and popcorn, but hates peanut butter, something most dogs love. He likes ice cream, but it makes him throw up. He has no interest in Kibbles and Bits, but will dance and leap when I deliver his new meal, a half a cup of —Science Diet Nature’s Best three times a day, each meal mixed with two tablespoons of canned Science Diet.

He’ll chew my shoelaces off if I leave my shoes lying around. The hair dryer terrifies him, though he’ll tolerate a bath. He likes to dig holes, then shove his head inside them and bark. Ditto for slippers. He likes the sound of his own voice. A pig’s ear will keep him still for as long as two hours, quietly gnawing, and occasionally woofing softly, at his prize. He has little interest in nylabones and would rather eat rocks and sticks. He loves soft drink cans and will chase them all day but would rather herd tennis balls into a corner than retrieve them. He shies away from strangers, then rushes to them, rolling over to have his belly rubbed. He’ll play with other dogs but is just as happy playing alone.

I’m consumed by the knowledge that these early months are fleeting, and I’ll forget so much. One day he’ll be an old dog with a gray muzzle. One day I will say goodbye. Already, that thought brings tears to my eyes. It’s so odd. I never expected to feel this way about a dog. I never thought I’d play frisbee just because it makes him happy. I never thought my passenger seat would seem so empty on the few trips he can’t accompany me.

So I try to record every milestone, every passing phase in his life. Right now, the bunny reigns supreme. My neighbor, Ron, gave it to him. I’d bought a small stuffed bear, never realizing how big Cowboy would be. He loves the bunny because it’s soft and squishy, and he can drag it between his legs and mock growl. The bunny goes everywhere we go. He brings the bunny to me during the day and presses it against my knees, looking eagerly at me with an expression I can’t resist. He falls asleep gnawing the bunny’s ears. He pounces on the bunny and shakes it violently, then lies down and holds it in his arms to sleep.

I end up taking a lot of things with me everywhere we go — short leather leash, retractable leash, bunny, frisbee, water, water bowl, treats, clicker. I’m beginning to think I need a diaper bag for this baby of mine.

Everyone may get very tired of puppy pictures. His day to day infatuations most likely matter to no one but me. But I’ve endured other people’s baby pictures and toddler stories for years. This is my baby. The closest to a baby I’ve ever had. So indulge me if I go on and on. I find it hard to smother how smitten I am with 16 pounds of pure, unconditional love.

Music: Spare Me the Details by the Offspring (lyrics)