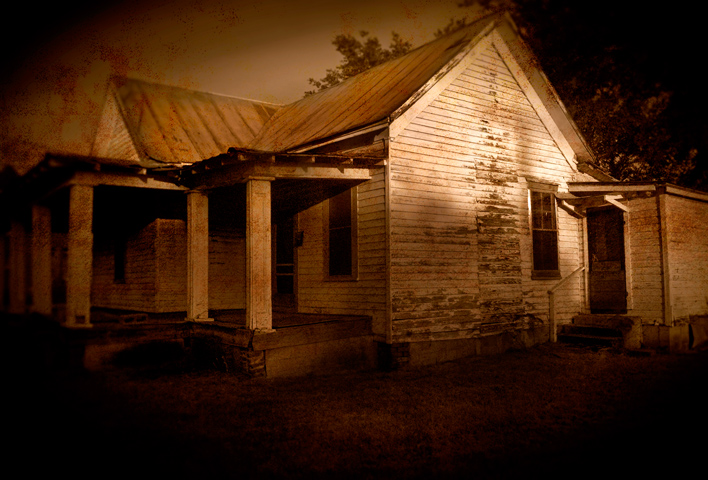 They’ve been gone a long time now. They’re not coming back. Go ahead. Press your nose to the window, down near the bottom where the lawnmower slung a rock the last summer before they left. Close your eyes and inhale. It’s dusty, of course. Hot too. But beneath that. Beneath the dark stench of mold creeping along the ceiling, beneath the noxious signatures of field mice, bats, and the occasional brood of barn swallows, lie other scents. The lingering sweet of Prince Albert crimp cut the old man would stuff in his pipe and tap-tap-tap against the mantle at the end of another day when the rains didn’t come. The cloying scent of the perfume he bought in Paris the day they knew the war was over and he was coming home to her for good.

Step carefully over the rotting boards, and find a solid place to stand on the sagging front porch. Look to the north and see the strip mall no one ever could have imagined marring the flat land. Look to the south and see the glut of nine to fivers griping their way home. Look to the west, where the fertile soil once provided sustenance. It’s gone too now, replaced by a highway that leads to nowhere anyone wants to be.

The only thing that remains of what once was lies to the east, a ramshackle row of clapboard houses that missed the first fall of the scythe but won’t survive the next. Progress, they call it. Progress killed the lumber mill and took the factory with it. Progress sent the children fleeing to cities where the grass is curtailed from its wild tangle, the dirt parceled into squares too small to draw a decent circle to shoot marbles.

But somewhere out there, when they peer beyond the sodium vapor of the artificial lives they can’t seem to escape, they let their minds wander. And if they stand there long enough, staring at the dim specks that might be stars if they wish hard enough, they find their way home.