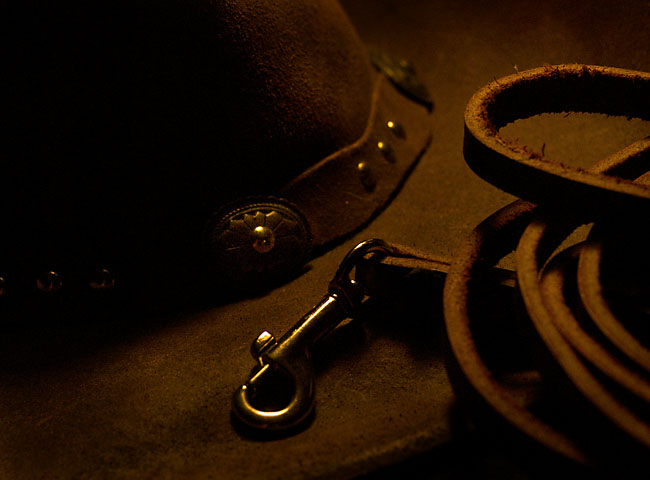 On a cowgirl’s desk, study in brown

We walked beneath a blanket of stars tonight, the dog and I, sucking in the cool, clean air and reveling in the hush of a city gone to sleep. There are no iPods in this world, no headphones to block the sound of a collar jangling, a shiny tag clinking against the leash clip. People complain about walking the dog, but I like this timeless, star-strewn ritual. Like so many things I’ve done this year, it feels right. Achingly familiar in that way that makes people believe in past lives.

The leather is comforting in my hands, weighted perfectly to be substantial but no undue burden to either holder or held. I laugh as he romps through patches of roadside clover, and he pauses to look over his shoulder, head cocked, one ear raised, when I straggle.

There are those who say a dog must be reminded, early and often, of his position within the pack. The owner must take charge with his eyes, his hands, his posture. Everything an owner’s body communicates must broadcast the message: I am in control. To a certain extent, that’s true. A dog that knows his place finds comfort in the lack of ambiguity, and an owner that waffles on the issue will cause more harm than one who takes no stance at all.

I try not to think of these things as I breathe in the night air, letting him wander where he wishes and explore for as long as he likes. We’re still forming a bond of trust. To attempt to force submission without that bond is foolish at best and cruel at worst. He deserves to know I’m worthy of submission, to have no doubt cloud his eyes. He deserves to be my equal until his fealty bids him serve.

This flies in the face of all dog training philosophy, but I don’t care. There will be time later for structure and correction, but not now. Not yet. These early days are filled with lavish praise and gentle redirection. Four kinds of treats litter my desk; a few simple toys lie scattered on the floor.

He’s moved now, no longer at my feet, but I don’t mind. He lies, legs akimbo, on a soft blanket we earlier used to play tug of war.
There are those who say I shouldn’t do what I’m about to do, shouldn’t stretch out beside him and press my beating heart to the curl of his spine. They say I should never meet him on his level, but I ignore this too. Devotion isn’t earned by discipline, and though I do intend to lay distinct boundaries, now isn’t the time for it. In a few days, a week, I’ll begin serious training, but for now, the dog and I are forging a friendship that will make the rigors of this dominant-submissive easier for us both.

On some starry night, not tonight, I’ll look down at the bundle of fur trotting at my heel and marvel at his capacity to learn so quickly. But never for a moment will I think it was the leash or the command that produced this result. I’ll look at him on his level, and he’ll look at me on mine, and we’ll both know — he follows me by love, not force, and he submits to me only because I asked, not because I demanded.

In a few minutes, just shy of 2 a.m., I’ll wake him and slowly lead him outside for one more turn in the front yard before I face my own submission to the dream world. He’ll settle back onto his blanket and peddle his legs in that peculiar way sleeping puppies do. And somewhere, in the recesses of his brain, I hope he’ll remember today. I hope he’ll remember riding in the car with the windows down, strolling the pet store aisles to select a new treat, lolling in the grass at the park, lapping vanilla ice cream at Sonic.