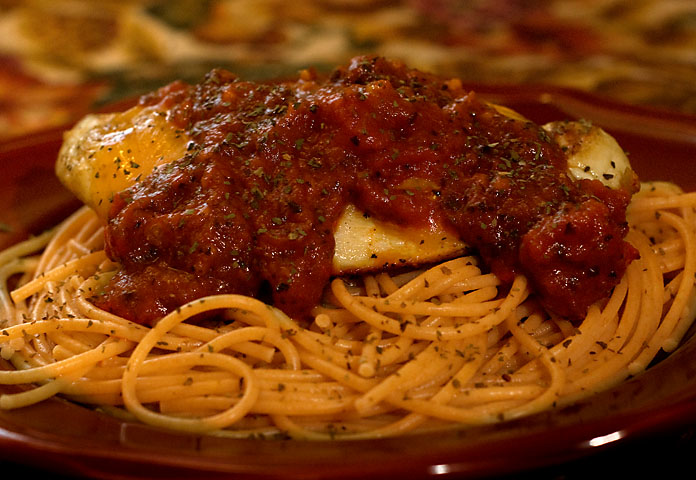 It’s been a while since I’ve eaten anything that wasn’t planned, plotted, and dissected, each gram of protein and carbohydrates laid on the table and analyzed as thoroughly as a mortician’s cadaver. After a year with Dr. Atkins as my daily companion, food had become a boring necessity in an equally boring day. Food had become an enemy, an evil being capable of decimating entire villages, bent on pillaging my flesh, determined to lay waste to every dream I held.

If I could, I’d describe the terror to you, the gut-clenching misery of the stray french fry that crossed my path. I’d tell you how an afternoon flirtation with a Sonic Reese’s Blast, double Reese’s, extra whipped cream, made me stand over the sink, looking in the mirror and knowing, knowing that I’d made that choice and purging myself of the evidence would never erase the guilt.

I could tell you how mortified I was when I failed, how spectacularly I failed, how I drove and drove, tears falling, the tang of the forbidden on my tongue. Cheeseburgers. Ice cream. Reese’s Peanut Butter Cups. God, the Reese’s. I could tell you how the sugar made me dizzy because I so rarely had it, how the taste blew my mind and made me want more immediately after I swallowed the last bite.

I could tell you how I sat in an expensive restaurant and disintegrated into tears when the steak I’d ordered with steamed broccoli arrived with a baked potato oozing so much butter and sour cream that I almost buried my face in it and drowned. I wanted. Christ I wanted.

I could tell you how many nights I went hungry because I was bored with my morning cheese omelet and my evening Bubba burger. I could tell you how I tried to convince myself that a supper of coffee and cigarettes was normal behavior. Noble even. How the light-headed pleasure-pain of forced starvation made me confusingly satisfied. In control.

I could tell you how I stood in front of him and suddenly knew I would eat. Such a communal thing. So many invitations I’d turned down because I couldn’t pursue my skewed eating habits. And when he said “cheeseburger” I knew I was done for. Of course I’d eat. He didn’t fly a thousand miles for a freezer burned chunk of over-processed beef.

Or I could tell you how food relinquished its hold over me, meal by meal. How the WT made a healthy eating list, menus detailed in that maddeningly thorough way he has. How much fun I had at the grocery store, buying cereal and french bread and orange juice and things I haven’t tasted in twelve long months. I could tell you how it feels for the lazy taste buds to come roaring back to life.

And I could tell you how that scares me most of all. The loss of rigid control. The calories themselves. The carbs. Oh God, the carbs. It takes a monumental effort to allow them to cross my lips, but I know I have to. No choice. I’m scared it’ll get out of hand. That I’ll like it too much. I won’t stop. I’ll return to 289.5.

But none of that is on my mind tonight. I’m enjoying cooking again. Tonight I made a quick, easy, and fancy (for me) meal. Just chicken fried in olive oil, topped with melted cheddar and pasta sauce, laid on a bed of whole grain pasta. I could tell you how excited I was to dig my camera out of the bag, plate the food carefully, fuss over it. Embrace this monster. Stare it in the eye and capture it in a frame.