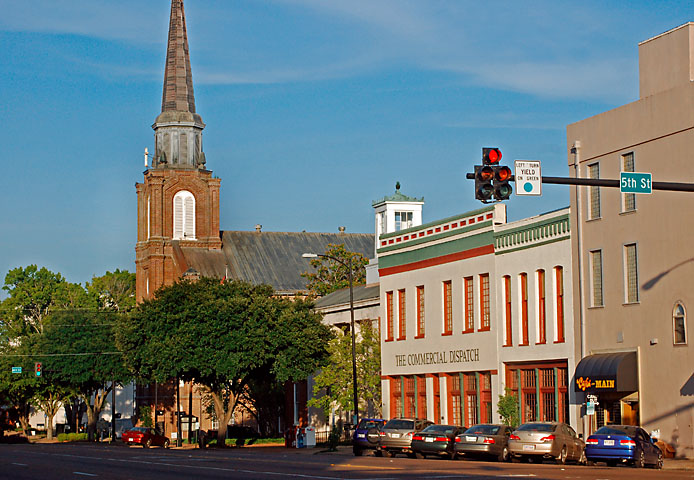 I’ve seen a lot of small towns, but I still contend that Columbus has one of the nicest Main Streets of any city I’ve visited. There’s something very All-American about driving down a nice wide street, seeing the newspaper office and a church steeple shining in the distance. From a photography standpoint, just about the only thing that could make it better would be American flags hanging from some of the store fronts. I’m not sure if they have parades and such, but if they don’t they should. It’s that kind of place.

Music: Maybe It Was Memphis by Pam Tillis (lyrics)

The sun rises on the offices of The Commercial Dispatch Aug. 8, 2007 on Main Street in Columbus, Miss. The Dispatch, a family-owned and operated daily newspaper, is headed by editor and publisher Birney Imes III and covers Columbus, Starkville, Miss., and the Golden Triangle. The paper was formed by the merger of The Commercial and The Dispatch in 1922 and has a daily circulation of 13,586 and a Sunday circulation of 14,695. (Photo by Carmen K. Sisson/Cloudybright)