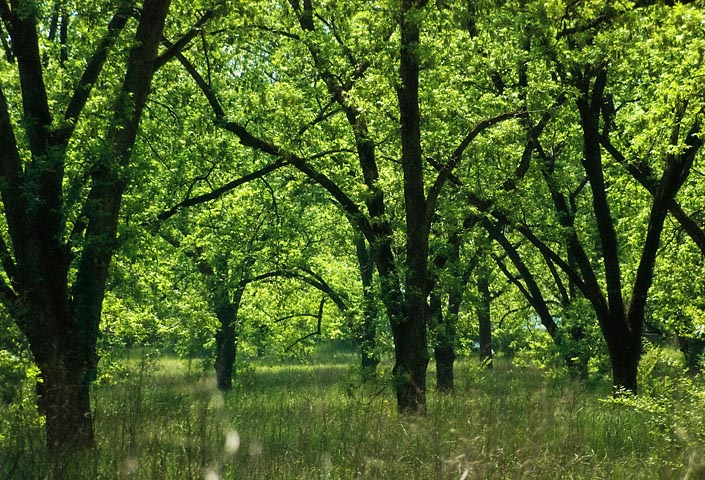 One of the first things that struck me about Georgia was the abundance of pecan trees. Almost every home has one or two, and almost every few miles you see an orchard like this one. In the springtime, with the light shining through, it becomes an enchanted wonderland where anything might happen. Orchards like these would make the perfect spots to take a blanket and a picnic basket and wile away the afternoon.

Alas, I was in a hurry, both coming and going. I spent the weekend in Ashburn, Ga., home of the world’s largest peanut monument, the annual fire ant festival, and the local high school’s first integrated prom, which was what brought me there. Who knew I’d be 33, going to the prom again? You can read the story here.

If I feel inclined, I may post a few shots from it tomorrow or the next day. It was a nice weekend. The drive was seven hours of pure pleasure, and I wrote the bulk of my story from 3 a.m. to 5 a.m. at the Ashburn Waffle House, listening to late-night prom revelers chatter. All in all a good trip.

Music: Seventies Mix: Ah Leah! by Donnie Iris, Ain’t Even Done with the Night by John Cougar, All My Love by Led Zeppelin, American Woman by the Guess Who, As Long as You Follow by Fleetwood Mac, Baby What a Big Surprise by Chicago, Band on the Run by Wings, Beast of Burden by the Rolling Stones, Blinded by the Light by Manfred Mann, Brandy by Looking Glass, Breakfast in America by Supertramp, Chevy Van by Sammy Kershaw, Children of the Sun by Billy Thorpe, Dirty Low Down by Boz Scaggs, Don’t Fear the Reaper by blue Oyster Cult, Dreams by Fleetwood Mac, Dust in the Wind by Kansas, Eye in the Sky by the Alan Parsons Project, Feel Like Making Love by Bad Company, Give a Little Bit by Supertramp, Goodbye Stranger by Supertramp, Heart of Gold by Neil Young, Hot Child in the City by Nick Gilder, Hotel California by The Eagles, I Can’t Tell You Why by The Eagles, I Go Crazy by Paul Davis, I’d Love You to Want Me by Lobo, Burning for You by Blue Oyster Cult, If You Think I’m Sexy by Rod Stewart, It’s Magic by ELO, Kashmir by Led Zeppelin, Kiss You All Over by Exile, Kodachrome by Paul Simon, Lay Down Sally by Eric Clapton, So Into You by Atlanta Rhythm Section, and Super Duper Love by Joss Stone.