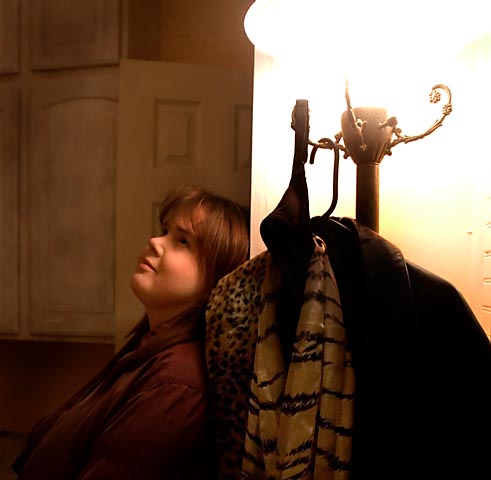 Words that start with “F”

In less than eight hours, I’ll be flying out of Birmingham International Airport, headed for Philadelphia to see my friend, Alec. I should be asleep, but sleep won’t come. My bags are packed, my clothes are laid out for tomorrow, everything is ready except for me. I’m still scared. Partly, I know it’s a lack of drugs. Unable to find the Xanax that calms me, I’m forced to cope on my own. It’s good for me, but makes it difficult to peel my white-knuckled hands from the door frame sometimes.

This will be my third plane trip, the first in wintry weather. I spent some time on Flickr this evening, just looking at shots of planes in the snow, planes covered in ice, frozen runways, ice crystals on cabin windows, and all manner of weather wonders. It helped to see that other people manage to fly in winter and live to blog about it, and so shall I. That’s the idea anyway.

Truth is, there’s nothing I can do to control fate. The one thing, the only thing, I can control is fear. I don’t want to spend the rest of my life cowering inside my house, afraid to live. I don’t want to look back and know I didn’t make the most of the opportunities given to me.

Two years ago, when Alec and I met, we spent a lot of time working on the phrase, “F-k fear.” At first, it shocked me. I’m a Southerner to the bottom of my toes. The “F-word” wasn’t part of my vocabulary. But there was something I understood immediately — a visceral reaction, a lifting of the head, a flashing of the eyes, a resonance deep within my bones.

This word told me we weren’t going to tiptoe. Everything was going to be laid on the line in this friendship. I was going to be pushed to the edge and told to dig in and give a little more, getting back what I gave in spades. We were going to talk about stuff. Real stuff. The bad kind of stuff that keeps you up at night. And we were going to use strong words. Real words. Words that hurt, words that cut, words that didn’t waste time cloaking the unfathomable in pretty bagatelle.

I was a master evader, but I’d met my match. My days of fake smiles and party line dogma were over. I was tired, and it came as a relief. F-k fear indeed, I thought to myself. In fact, f-k it all.

Of all the words I’ve thrown down, this one word — a word you’ll never hear me say unless I’m very comfortable with you — belongs to me. I worked for it. I stammered over it, fear silencing the syllables on the back of my tongue. I whispered it in wonder; I spat it through clenched teeth until I felt the emotion to go with it.

And that was of course the point. Not to say a “forbidden” word, but to find anger and channel it outward instead of in. Southern girls are taught to swallow anger and smile. It’s a hard lesson, taught with cruelty and enforced by fear. I learned it well.

Am I scared to fly? Yeah, I really am. I’ll be passing through the Charlotte and Raleigh-Durham airports tomorrow amid snow, ice, sleet, and who knows what else. But you know what? I want this. So.

Music: “Do Not Open Til April” iPod Mix: Amtrak Shuffle by Dale Miller, One of These Things First by Nick Drake, Heartbeats by Jose Gonzalez, Fast Car by Tracy Chapman, Take Five by Dave Brubeck, 37 Hours in the USA by Raw Stylus, Moving Into A New space by Sounds from the Ground and Nicola Hitchcock, Northern Sky by Nick Drake, Drive by Incubus, Story of a Girl by Nine Days, Falling for the First Time by Barenaked Ladies, Tubthumping by Chumbawamba, I’ll Fly Away by Nelly Furtato, Here I Go Again on My Own by Whitesnake, Wash Away by Joe Purdy, Believe in Me by Raw Stylus, Battle Without Honor or Humanity by Tomoyasu Hotei, Let It Roll by Little Feet, City by Jeff Lorber, Cruise Control by Dixie Dregs, Goin Crazy by David Lee Roth, Start the Commotion by Wiseguys, Same Direction by Hoobastank, Alive by P.O.D., I Wish You Were Here by Incubus, Cliffs of Dover by Eric Johnson, Afternoons and Coffeespoons by Crash Test Dummies, Find Your Way Back by Michelle Branch, I’m Amazing by Keb Mo, Mountain Waltz by Steve Morse Band, Heads Up by Dave Weckl, A Little Knowledge is A Dangerous Thing by Tower of Power, Epilogue by Sting, Change by Incognito, All Blues by Liquid Soul, Let Your Light Shine by Keb Mo, Heaven by Los Lonely Boys, Scuttle Buttin’ by Stevie Ray Vaughan, My Way Down by Chris Duarte, A Change Would Do You Good by Sheryl Crow, Regroovable by Chris Botti, Taboo by Dave Weckl, Volkswagon Commercial, Water From a Vine Leaf by William Orbit, The River of Dreams by Billy Joel, Dream on Dreamer by The Brand New Heavies, The Way Home by Chris Botti, Got My Own Thing Now by Squirrel Nut Zippers, Talkin’ Loud by Incognito, Bloom by Eric Johnson, Dance Into the Light by Phil Collins, Don’t Worry About a Thing by Incognito, and Philadelphhia Freedom by Elton John.