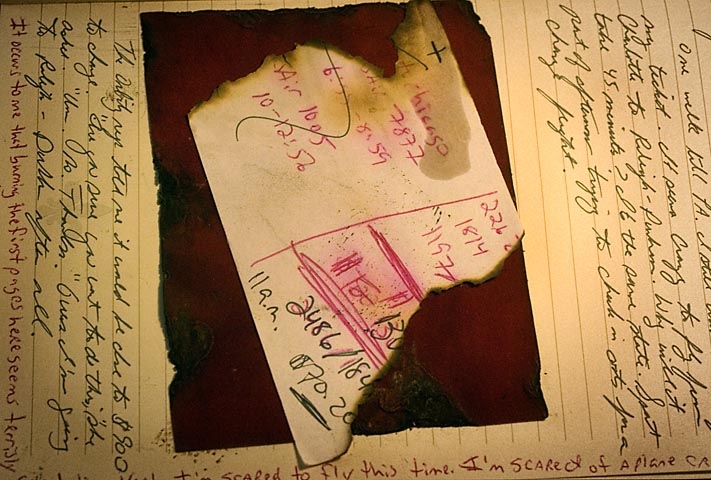 A lot of you have written over the past year to say I’m brave or my words have inspired you in some way. That means a lot. Now you get to see me seriously flake.

In approximately 128 hours, I’ll be sitting on an airplane, flying to Pennsylvania to see the WonderTwin and his family. This is a good thing. We always have a great time and there’s much shooting planned. I picked up a tour guide to Philadelphia this evening. My plane tickets have been bought for weeks. We had hoped to shoot acres and acres of unfettered snowy fields and — after unseasonably warm weather — it looks like it may snow by next weekend. All good, right?

Maybe it’s because it’s been five months since I’ve flown. The first time I flew, back in July, I was living on pure excitement. I flew to Boston a few weeks later and was mostly worried about catching a taxi and making it through Boston’s Big Dig without a ceiling tile crushing the car.

Then came my flight home. I flew from Philadelphia to Birmingham in a hazy gray fog of rain. Liquid restrictions were rampant, enforced just a day previously. Lightning split the sky from time to time. I thought I felt a bit of turbulence. A few passengers switched seats and I got nervous. Looking out the window, I saw the sky beginning to clear. The sun was setting, golden rays bathing the plane as we slid over steel gray clouds. Then the unthinkable — a bright flash of orange, right beneath the wing where I was seated. Sudden heat spreading around my feet.

I totally panicked, waved my hand, pushed the button to summon the stewardess. I could barely stammer out my words of impending doom. When she told me that the light was the plane’s night lights coming on, reflecting up from the cloud cover, I was only marginally reassured. What about the fire licking at my feet? Heater, she replied as if she’d heard this all too many times. I scrunched into my seat miserably and cranked my iPod.

There’s a new airport thrown into my mix — Raleigh-Durham. I have two stops instead of the customary one stop in Charlotte. It’s wintertime. It’s all this, and it’s none of it really. I can name a thousand reasons why I’m scared. None of them fly, pardon the pun.

Every day I ponder changing my ticket, switching to Amtrak, staying home. But I know fear isn’t an option. Wasn’t that the whole point of last year, to fly (quite literally) in the face of fear? I did that. A thousand times over. I don’t want to sit home and watch the WT post beautiful shots of snowy copses (why does the word corpse leap out at me?) I want to stand beside him at Valley Forge shooting stuff like this and this and this andthis.

I have an important doctor’s appointment Tuesday, and the brave girl is starting to break on that one too. And while I sometimes think I’ll let this space go, where else can I write this crap? The truth is, though I don’t always know what I want Cloudybright to be, what it is serves its purpose pretty well. Lately I’ve been fooling around over at Flickr. There are things I like, namely that only people interested in a specific photo are likely to see it, so people who hate self-portraits won’t be bored or people who can’t bear to see another shot of Boston can see cute cats instead. But I find it difficult to write there. It’s the equivalent of standing in the grocery store screaming your five greatest sins. Still, it’s somewhere to leave a mark.

Earlier today, I was moved to tears remembering how I once loved to write and receive letters.

I treasured the letters my friend Robert sent to me, squinty black on Marine Corps letterhead, hastily dashed from his bunk in Twentynine Palms, Calif., long missives from college, disjointed ramblings from Cairo, where he photographed himself standing in the desert and told me rollicking stories of buying live chickens for supper. There were the love letters written in sappy Hallmark cards and on blue-lined college-rule paper from my first lover, followed by more of the same from my second. There were the Bic-smudged deliriums of my intellectual soul mate Stephen — breezing in and out of my life so long ago I don’t even know where or why anymore. Just that he’s gone and I got over it. There were the magazine collages from my best friend in college, shared daydreams of houses and china patterns, wedding dresses and baby shoes. There were the purple-looped letters from my old neighbor, complete with pictures of children I’ve never met. There were letters written on Italian stationery, letters folded like tiny Origami birds, letters folded and sealed into mystery contraptions rivaling a Da Vinci-esque cryptex. There were letters from home, postcards from Costa Rica, pictures from Paris.

Now there is email, and sometimes there’s precious little of that either. Tears falling, I asked Alec what the hell I’m looking for. “Belonging,” he replied without hesitation. “It’s what you’ve always looked for.”

And so I suppose it is. I feel rootless. Shiftless. Though I write for the Monitor often, I’m not a staffer. Though I have friends, I don’t really fit anywhere. I’m a photographer half the time, a writer the rest. I’m not married but not single, not brave but not timid, not old but not young anymore. For the first time in my life, I belong to nothing and swear allegiance to even less. It’s disconcerting.

I feel like my life is in total free fall, and as exhilarating as that can be, I have the uncanny feeling I’m going to throw up on my shoes.

Music: The Poet Acts from The Hours