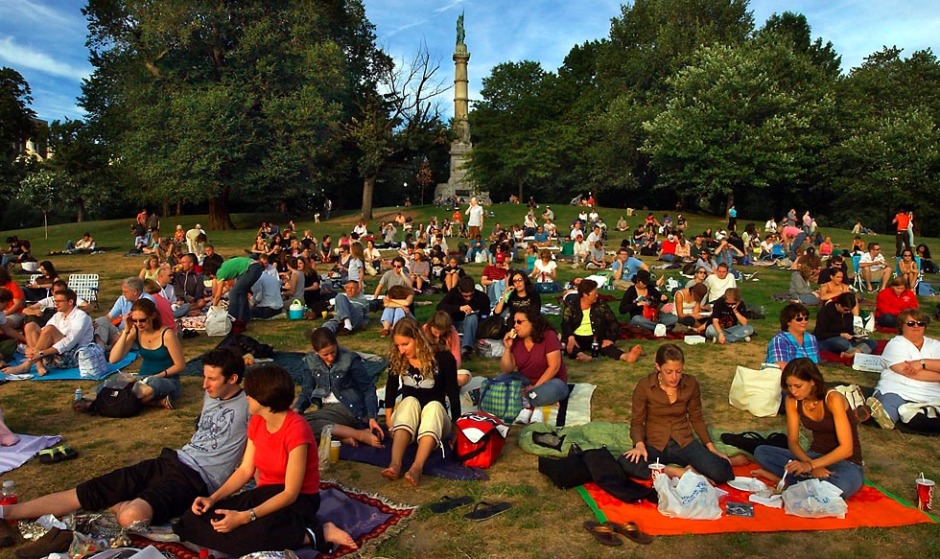 Boston, Massachusetts
The day had been long, the heat oppressive. I didn’t want to go home, not yet. No one in Boston ever went home. Not the townies anyway. Twenty-four hours a day, seven days a week, everything you wanted was on display. A girl could get lost, get found, get saved, fall all over again — and that was just Newbury Street. When the clock struck four on another empty weekend, I knew I wasn’t heading back to Comm Ave.

Black jacket slung over my shoulder, nametag swinging, I strode out of the Monitor’s offices, strong in the boots that had kicked my ass and almost claimed my sanity — and that was just the FIRST day. Five weeks later, I knew I was leaving Boston and everything it meant. Maybe forever.

Down Mass Ave, past the Dunkin Donuts with its ridiculously long lines. Past the Thai restaurant, where I ate satay while watching the rain fall. Past the Indian tailor, who accepted my jackets in the evening, worked his magic overnight, and delivered them to me fresh for work the next day. Smiling at the shoeshine man on the bridge, Nope, boots are clean today, thanks, buying a bottle of too-expensive-to-not-have-a-name water from a man sitting on a red Igloo cooler — Coldest water in Back Bay, he had said, and he was right. Peering through my bangs at the rip-jeaned Berklee boys strumming guitars and smoking, blushing when I tripped on that same damned sidewalk crack because I wasn’t paying attention. Past McDonalds,No you really can’t buy a lobster roll there, don’t ask, they’ll laugh at you, past Bukowski’s, where I drank a pint of dark oatmeal stout with a peanut butter bacon cheeseburger, extra cheese, extra bacon, extra onions, ixnay on the lettuce next time.

When my feet hit Newbury, I stopped. To my left, a very lux, very empty brownstone. To my right, seething humanity in all its crazy beauty — finely-coiffed girls carrying impossibly tiny dogs in even tinier jeweled purses, saturated ateliers and silky slick haberdasheries, French bistros and ethnic cafes, booming dance clubs and gentile boutiques with doormen glumly standing guard outside. Residents lucky enough to live on the street sat on narrow steps, chatting on cell phones and drinking cocktails. An elderly man potted geraniums. A cab driver cursed, then smiled. A homeless man slept peacefully on a bench with a gaggle of ska teens, a brood of pigeons fighting over packets of soy sauce beneath his feet.

I stopped at Upper Crust pizza, where I enjoyed being asked for my order — twice — because the clerk had never heard a genuine Southern accent. Tucking two greasy slices into a paper bag, I strolled to the Public Garden, each image burning itself into my brain with more and more breathtaking, achingly miserable beauty. Parents pushed children on tricycles down winding paths filled with dappled sunlight. Couples tarried beneath the weeping willows, winsome girls standing, nervous hands clenching the tree trunks behind them as boys played the rake, first stealing a kiss, then deigning indifference. It was late summer and it seemed like the whole world was pairing off — boys, girls, mallards, drakes.

Ahead, through the dense thicket of trees, lay Boston Common. I sat on a bench and fed pizza to the ducks, watched the Canada geese flying in formation over the Frog Pond and knew soon it would be frozen, covered with ice skaters pirouetting beneath a canopy of twinkling white lights. There was a chill in the air that said all things end.

Stumbling into a clearing, I saw thousands of people — a human picnic basket upended onto the lush green grass. Overhead speakers blasted “Sgt. Pepper,” and I sucked my breath in sharply as the loneliness bit. Fuschia flyers informed me this was “Shakespeare on the Common.” The Taming of the Shrew. I wanted a blanket. I wanted a too expensive lemonade from a Rhode Island vendor who didn’t speak English. I wanted to be pulled down into the long green grass, laughing in protest, kissed madly for no other reason than it was a beautiful summer evening and this moment would never exist again.

The BlackBerry did not blink. I turned off my iPod and soaked in the sounds. I wouldn’t be here much longer. Six more days. I would never be able to articulate the jumbled emotions of this city. Everything that should have been, could have been, might have been, and was. If you weren’t there, you missed it.

I was there. And then one day I blinked my eyes and it was gone. I woke up on a plane bound for Birmingham, clouds of fire boiling beneath my feet, and knew nothing would ever be the same.