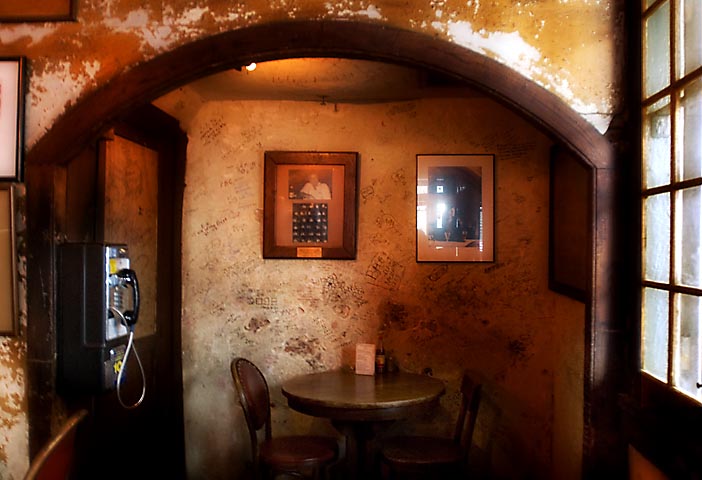 The images shot, the interviews completed, I wiled away the remaining two hours curled into a question mark at this table, throwing back sweetly sour Pimm’s Cups and writing — longhand scrawls looping through my reporter’s notebook and smearing across pale blue-lined pages.

The waiter was younger than me, with brightly polished wingtips and a shiny gold chain holding his grandfather’s pocket watch. Like all good waiters, he kept the alcohol flowing and the chatter to a minimum, the kind of waiter I usually tip double — once for the smile and twice for discretion. When I looked up to see a furrowed brow hiding beneath a mop of curly black hair, I set my pen aside and beckoned him to the chair opposite mine. If he noted the tears, he wisely let them dry.

Instead, we talked about Poe, to whom he claimed distant ancestry, and his aspirations of being a poet. I told him he needed to have his heart broken first, and he told me he swam from his crumbling childhood home in the wake of Katrina. He asked if I’d ever had my heart broken and I said yes — it didn’t make me a better poet.

The white hot glare of late afternoon bled into a sultry bronze dusk, and I continued to write, wishing for rain to beat upon the windows, wishing for the telephone to ring, wishing for company, wishing for nothing. As the ice melted in more glasses than I should have had but not nearly enough for the task at hand, the feverish, heaving scribbles subsided into choking splutters and finally, finally blessed blankness.

“Can I read what you’ve written?” the waiter asked, but I softly demurred. He could not have read my handwriting — I couldn’t make out the words myself. But the emotion behind them was all too clear. Slanting slashes of burgundy ink splashing across pristine white. An almost perfect metaphor.

One day, I will write that story again. Or perhaps I never will. But tonight in New Orleans, tucked inside a dirty crevice on Rue Chartres, is a sheaf of paper carefully rolled, bound by a frayed bit of blue satin that once belonged to me.