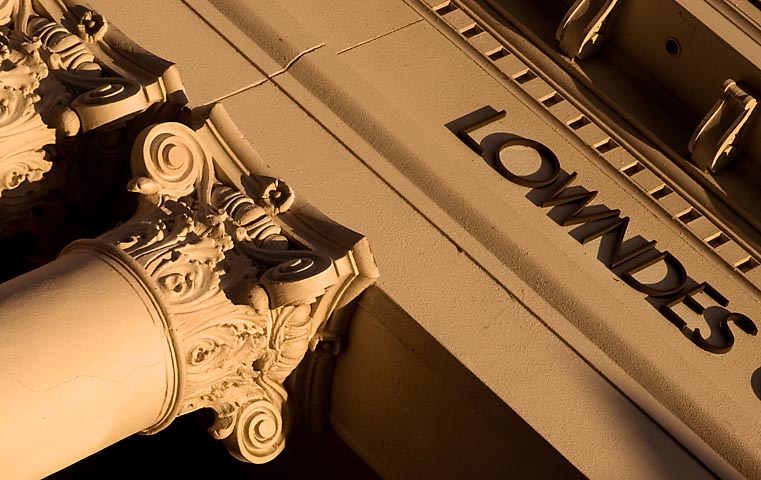 The lowdown on Lowndes

This is the county courthouse in Columbus, Miss. The trip went well and I’m pleased with a lot of the photos taken during the three days I was there. Still, I have to admit that I could make my own comic book of mishaps — DangerGrl: The Lowndes County Edition.

It all began right before the Columbus exit. I was talking arguing with my mother on the phone, and I had just told her I needed to go because traffic was heavy and I needed to concentrate. Approximately 30 seconds later, I hit something in the road at somewhere near 80 mph. I swerved and almost bit the dust right then. I managed to regain control only to realize that my car was making a horrible racket. Considering I had paid $120 that morning for a new… what the hell DID I pay the mechanic to do that morning? Oh yes. A new vacuum hose. Anyway. Considering that, I wasn’t feeling lucky.

When I got out of the car, the hissing sound that greeted me was even less promising. The black marks all over my rear quarter panel, combined with deep gashes, just plain confused me. A quick inspection revealed a rubber strap with two metal S hooks on the end, one jammed in my rear tire and the other flailing loose. That’s what had caused all the damage.

Luckily, things improved a great deal after that. I didn’t have much farther to fall though. There was the rose bush that I knelt down on while transfixed by butterflies buzzing around a patch of lantana in front of the Tennessee Williams House and the grass that left my eyes watering and red after I laid down in it to shoot photos at the dam.

There was the shower door I accidentally placed my hands on in one of my rooms… too bad I had my eyes closed, blissed out by the experience. I fairly well almost soaked the room before I opened my eyes and saw the fine hot water spraying everywhere. Yeah. That would explain the draftiness.

There was the waiter at the very nice restaurant who I startled when in my befuddled, exhausted state I blurted “No!!!!” very loudly when he asked if I wanted fresh pepper on my salad. Pepper? Salad? Huh? Must be a Mississippi thing. I tried to explain that I had gotten up very early and was rather tired. I’m a nice person really, but I don’t think he believed me — especially when I snubbed my nose at the dessert tray he tried to tempt me with.

There was the canned coffee that I sprayed all over myself and my windshield one morning. Starbucks should realize that sleep-deprived people are going to use their product. If it’s not meant to be shaken, for God’s sake put that in bold print on the front. Something along the lines of “May put eye out if tilted more than 45 degrees more than twice” should work.

There was the moment standing on the sidewalk when I revealed my Boston girl roots, much to the amusement of a very cute architect. How was I supposed to know there’s no button you can push when you’re tired of standing there and want the light to just change already so you can cross? I swear that shiny silver screw looked like it should do something important.

There was the obligatory “Nature Encounter,” where I learned that not all armadillos run away. Some actually run towards you when you approach. Turns out I’m much more agile than I thought. I managed to leap into my car by jumping through the window. Well. Okay. Not quite. But pretty close. I’m not proud that a creature smaller than my cats scared the daylights out of me, but they’re pretty ugly. You know?

And then there were the contact lenses. Friday night, I left my contact lens case in the car — a fact I didn’t discover until almost 3 a.m. By that time, I was already wearing pajamas and didn’t want to go back out to get them. Fine. I thought I’d just put them in a cup. The contact lens solution was in the car too. So I did what any girl would do — I took them out and laid them in a glass dish.

The next morning, I popped them into a plastic cup, threw my fuzzy blanket over my arm, threw my camera bag and backpack over my shoulder, picked up the cup of dry, brittle contacts, grabbed my suitcase with the other hand and headed down the stairs. They were narrow and there was a weird turn at the top which was difficult to navigate with my hands full. I slipped and almost ended up careening head-first down the stairs. I regained my footing and made it to the bottom, dropping everything at the foot of the stairs and peering into the cup. No contacts. Great.

Pawing through the blanket like a blind person reading a book in Braille, I managed to feel the sharp plastic edge of one. But where was the other? Lying on the floor in the very nice Cartney-Hunt House, I crawled along the baseboards, searching for the other errant eyepiece. From the kitchen, my hostess amiably inqured about my breakfast desires. Juice? Certainly. Coffee? Sure. Omelet with shrimp? Yum. The ability to see things clearly? Really quite priceless.

I have an amzing knack for clumsiness. Awkward syntax, fumbling steps. I can be a mess sometimes. But all in all, I tend to land on my feet, one way or the other. I never knew that about myself. I always thought I was helpless. Inept. Timid. Shy. Turns out I’m pretty resourceful. I rarely use maps and almost never get lost. I break things at an alarming rate and almost always manage to fix them just as quickly. And somehow, someway, every city I visit becomes a piece of me.

And so it goes with Columbus as well. The DangerGrl came calling, but the Boston Girl left smiling. It takes a lot to make me smile sometimes, so that’s a pretty high compliment for a small Mississippi town.

Music: I Don’t Wanna Be by Gavin DeGraw (lyrics)