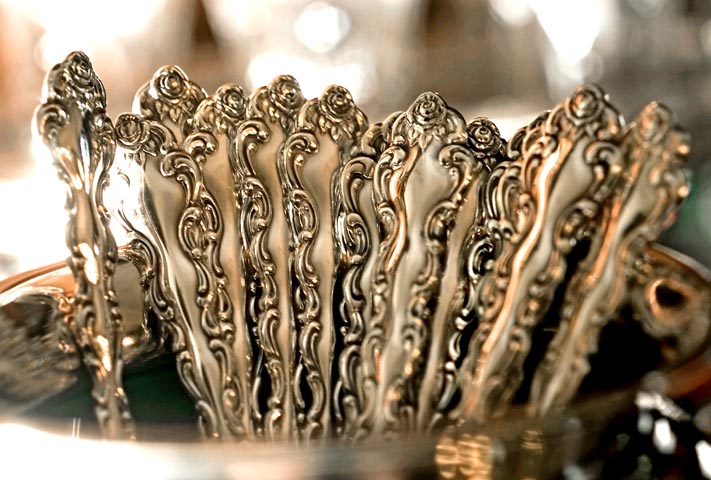 Silver at Shadowlawn, the bed and breakast where I stayed Friday night.

I’ve done and seen a lot of things since I got to Columbus. Right now my head is blur of places and things. Spent much of yesterday wandering around downtown, Friendship Cemetery, various shops in the surrounding areas, and along the marina and along the waterfront.

I ate supper last night at a really nice restaurant, J. Broussard’s, where I had crabmeat au gratin and sauteed veal medallions in lemon butter. Sorry, no photographs, though since I’m transmitting this from across the street at the Tennessee Williams house, I’m sorely tempted to wander back over for lunch research purposes.

Spent Saturday night at the comfy Cartney-Hunt House, where I spent the night in this room.Took a lovely stroll along the riverwalk this morning, where I got some nice photos, then spent a little bit of time poking around a cool century-old railroad car.

The agenda for the afternoon will be to photograph shoppers, hit the marina around sunset, and catch some of the Columbus nightlife. I’ll stream photos in multi-image batches over the next few days and detail more of my adventures then. For now though, it’s back to work. 🙂

Technical notes: This was taken with my old, beat-up but much loved manual 55mm macro, and yes, that is indeed off camera flash you detect to the left. It’s a bit blown out, but I liked the glittery bokeh it gave me in the background, so I left it that way.

Music: Paint Mix: Tainted Love by Soft Cell, I Hate Everything About You by Three Days Grace, You Never Call Me When You’re Sober by Evanescence, Faint by Linkin Park, Out of Control by Hoobastank, Harder to Breathe by Maroon 5, Don’t Stay by Linkin Park, Just Like You by Three Days Grace, Hang On by Seether, Down by the Water by PJ Harvey, Same Direction by Hoobastank, Breaking the Habit by Linkin Park, Won’t Back Down by Fuel, Pull the Trigger Like You Mean It by Brand New Disaster, Let the Bodies Hit the Floor by Drowning Pool, So Far So Good by Thornley, Meant to Live by Switchfoot, The Leaving Song Part II by AFI, Sad Exchange by Finger Eleven, Sooner or Later by Breaking Benjamin, Figured You Out by Nickelback, 18 and Life by Skid Row, I Don’t Like Mondays by The Boomtown Rats, Now That It’s Over by Everclear, Think Twice by Eve 6, Wasteland by 10 Years, Always by Saliva, Wen It all Goes Wrong Again by Everclear, Whisper by Evanescence, Bring Me to Life by Evanescence, Jenny Was a Friend of Mine by The Killers, Pretty Noose by Soundgarden, Self Esteem by The Offspring.