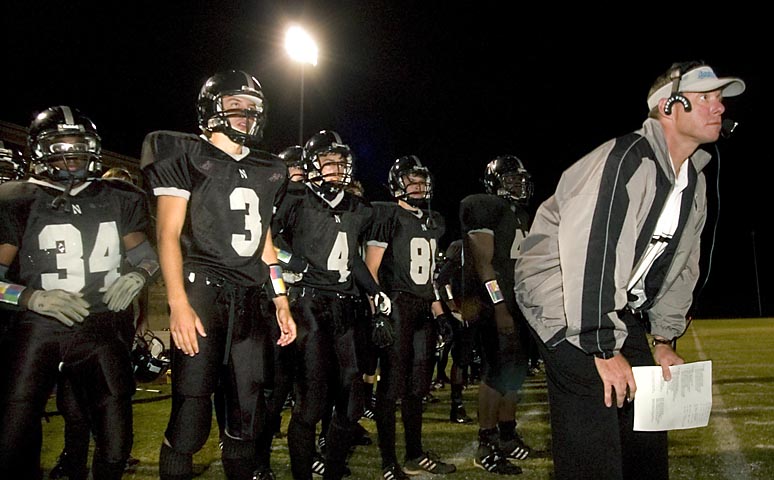 Sometimes you get more than you counted on when shooting Friday night football. In my case, I finished out the evening with a mild concussion, a sprained hand, a cracked lens hood, a broken flash, and a telephoto that won’t focus properly.

I knew things weren’t going to go well when I arrived at the game only to discover that I was woefully underdressed for the weather and had forgotten my picture card. Turn around. Go home. Get the card. Change the shirt. Go back. Five minutes on the field and I knew I was screwed. Really badly. My 80-210, a hand-me-down from a fellow photojournalist who droppped it more times than I have, refused to focus. Okay. No problem. I figured I’d just manually focus. It was jammed and refused to budge. I managed to fire one or two frames before it gave up the ghost entirely.

My 35-80 is a slow lens at f/4.5 — not really suited to a night-time football game. I tried it anyway. Another hand-me-down from a different photojournalist, it suffers from the same jammed focus problem. That left me with two lenses — a 55mm manual macro and a cantakerous 18-35 Sigma, yet another hand-me-down, battered and banged up by an entire staff of photojournalists.

That’s how I found myself prowling the sidelines with a wide angle, not my lens of choice for action photos.

I’ve been shooting high school football since I was 14 years old, and with the exception of about three years, I’ve been on a field somewhere most every Friday night in the fall. It gets old sometimes. You’d think I’d be better at it by now. I’m really not. I have my moments, my nights. Some nights completely blow, and this was one of them.

I called the sports department at my paper and advised them that there would likely be no action photo unless the players literally fell at my feet. How prophetic. The page designer requested an image of the coach on the sidelines, yelling at players. That should be easy enough. I waded through the players and planted my feet firmly on the 35-yard line, shot this image, then held my place, waiting for the coach to show some sort of expression.

About five seconds later, I was flat on my back, players and a team medic standing over me. Two players had crashed into me while chasing a play out of bounds. One hit me in the chest, while the other hit me at the knees, sweeping me off my feet and beneath the other player. I blacked out for only a few seconds, leaping up in embarrassment before the doctor cleared me to stand. While she picked confetti and grass from my hair, she asked questions: Did my knee hurt? I took a direct tackle. Could I see clearly? My head hit the ground pretty hard. Was my neck ok? Did it hurt to move it? Was I dizzy? Nauseated? Did my stomach hurt? Kidneys? Ribs?

In a daze, not accustomed to so much attention, I gathered my equipment from the ground and stumbled away. Pride wasn’t about to let me admit that no, I didn’t feel very well at all. I was nauseated, with a blinding pain running from my neck to my tailbone. Black spots drifted in front of my eyes, and there wasn’t much that didn’t hurt. Six hours later, I can honestly say I feel like I’ve been hit by a truck.

As for the photo, it was another lackluster night. I’d hate to think this could have gone down in history as the last photo I ever took. So to make up for it, I’ve spent the evening curled in my comfy chair, playing in the Kool-Aid that is Flickr. This all used to be more fun, somehow. I used to be better. I’m getting old. I’m getting tired. I’m getting sloppy. I miss high school, in more ways than one.