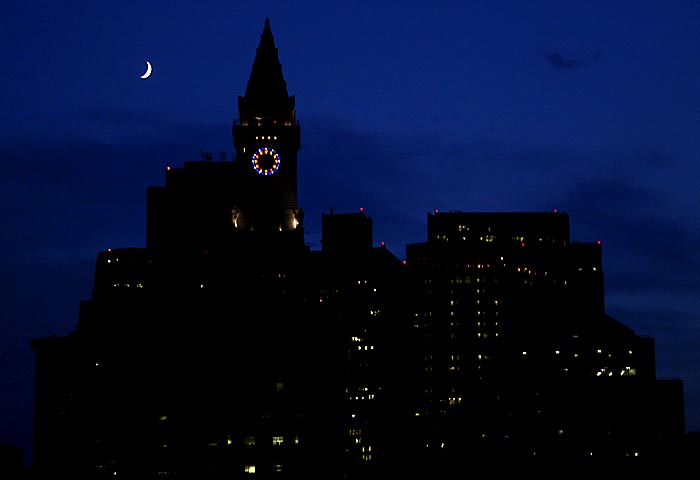 And so the lights go out on the city of Boston. How many nights did I sit on the wharf, this sight behind me as I turned my face to the sea? It always made me think of Batman in his tower, some modern day Gotham City.

So many things I wanted to do with this, my next to last night. But with the stress and anxiety of work gone, I finally crashed this evening, collapsing into a muddled mess of tears — old hurts, new hurts, old fears, new fears. I didn’t realize just how hard I had been trying, pushing a daily agenda that bordered on insane at times.

Tonight, faced with a list of places I still haven’t seen — Walden Pond, the Isabella Gardner Museum, Rockport, Paul Revere’s House, North Church, Copp’s Hill, New England Aquarium — I just melted. Stood in the shower for almost an hour — the hot water here is endless — and cried and cried and cried. I don’t know if I was sad so much as just completely exhausted emotionally. I wanted so much to do well. I hope I succeeded.

I had planned to go to the Skywalk Observatory at Prudential Center, then make it over to Harvard Square for a burger at Mr. Bartley’s Burger Cottage and a stroll through Mount Auburn to leave a pebble on Longfellow’s grave. Instead, I trudged down the narrow stairs to the basement with an armload of laundry, then trudged back up the stairs and ordered a pizza from Upper Crust.

Part of it is that I am into my second week of some asthma-bronchitis-pneumonia-type thing. And part of it is … pick your poison.

There were things I wanted to do tomorrow too. Breakfast at Dunkin Donuts (which seems to be the food of the gods around here). Sunrise shooting along the wharf, the North End, morning in the Public Garden. Instead, I’ve made a noon appointment for a haircut at the ridiculously trendy Charles Maksou salon. Completely frivolous? Yeah. Expensive as hell? Yeah. A waste of my last day here? Maybe.

But in the end, what better way could I sum up my time here? From the very beginning, my goal was to try new things, learn to relax, and try to cultivate an appreciation for total, hedonistic pleasure. If a cutting edge “dry cut and blow out” from an “artisan-dayspa” doesn’t fit that description, then I’m a hopeless case.