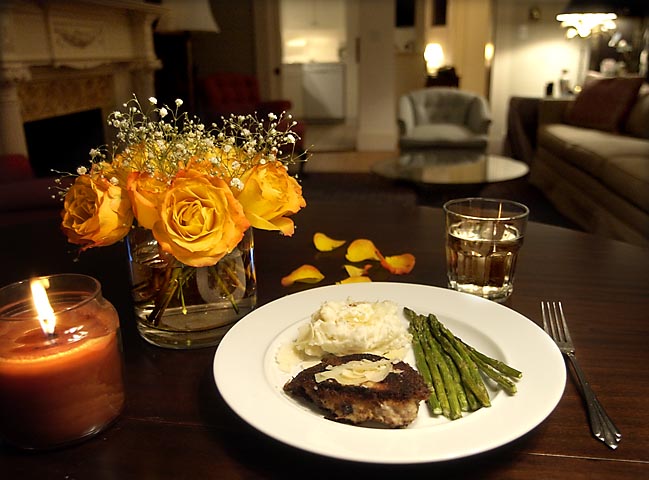 As I wandered through the supermarket, lightly brushing my fingertips across the wines, cheeses, and grapes, I tried to remind myself not to rush through this experience. Savor it. Enjoy it. Relish it. Remember it.

Tiptoeing up the stairs inside Shaw’s, I stepped into the florist’s cooler and inhaled the woodsy scent of roses. Oh so expensive. For a moment, I almost lost my composure. I’ve bought dozens of roses over the past year, so many that the smell took me back immediately — Boogie. I closed my eyes, felt the pangs of guilt rake through me at the thought of his lone grave so many miles away. I haven’t bought roses for myself since he died. It was our special thing. He’d pluck them out of every vase I stood them in, and scruffing his hair, I’d scoop him up and kiss him and set them right again. How I miss him, still.

But this was a dinner date, and dinner dates require flowers on the table. Especially dinner dates in ultra-cool, oh-so-swank city girl apartments. And if tulips aren’t in season, roses are my next choice. Boo has been gone so long. Maybe just this once he’d forgive me.

As I continued my trek through the store, I carefully selected asparagus, garlic, olive oil, shaved parmesan, pork chops, and a nice Italian pinot grigio. It seemed extravagant. Excessive. Something you’d do for a lover, or at the very least special company. Not for one’s self.

Which of course has been the point of the entire Boston experience. To try things I haven’t tried before. To change one thing. To change everything. I splurged on a taxi home and looked out the dirt-stained windows at the city that so quickly came to feel like home. I’ve enjoyed my time here. It’s fitting to spend an evening during this, my last weekend, reflecting on everything that has gone right — and wrong.

I’ve learned a lot about myself.

I met a tough girl who snapped and snarled when a homeless man grabbed her leg in an attempt to get her attention. That fearful girl who has lost so, so much — she didn’t take it silently this time. She not only lashed back, she did it with a modicum of grace, giving him the money he sought — after she stared him down and asked, demanded, an apology. So many years too late, an apology she never could ask for before. Never thought she deserved. Stunned, I watched that girl walk away, hair flying, all claws and confidence. Where the hell did SHE come from?

I met a good-natured girl who laughed during yet another homeless encounter when she thought she’d be nice and buy a guy a hamburger. When he threw it back at her, complaining that he wasn’t about to put those PRESERVATIVES in his body, that girl just stood there, tendrils of shredded lettuce mingled in her hair, and laughed. She didn’t cower in fear at the unexpected response, and she didn’t get upset about the money lost. She just looked up at the puffy white clouds gliding between the tall buildings and laughed at the insanity of it all.

I met a self-sufficient girl who set out every day with a map and a pocket of subway tokens, determined to see the best the city had to offer. I hung out with her as she laid on the warm rocks along the harbor’s edge, flat on her back, arm draped over the water, cigarette entwined in loose fingers, inhaling and exhaling, staring up at the stars, just smoking and thinking. I saw her walk miles in bad shoes and hole-ridden socks that left blisters. I heard her give directions to lost tourists, using all the colloquial slang. I watched her stand on a boat railing, reveling in the surf that sprayed in her face, saw her feed pizza to the ducks at the public garden and laugh as they washed the tomato sauce off before eating it. I saw her go to the movies at midnight, take the dreaded escalators and elevators she fears, walk in the foamy dregs of the Atlantic Ocean.

I saw a strong girl who stopped looking over her shoulder, stopped watching for the shadow beneath the door, stopped checking the stairwell for intruders, stopped sleeping with the lights on, stopped taking the Xanax that untangles the nerves but muddies the head.

I saw her suck up a major disappointment and let it go because it was eating her alive, and I saw her crawl beneath the covers and hold her hands to her head, struggling to cope with her darkest fears. I also saw her stand up, every day, and go to work. On time. Coiffed and polished. Through rain and sickness, heat and misery, she managed.

Yes. Why not celebrate?

Slipping in the door, tossing my nametag and keys on the foyer table, I poured a glass of wine and started a shower, sneaking a peek at the girl in the mirror. Her eyes were shining, so I smiled at her, and surprisingly enough, she smiled back. I took the time to straighten my hair and apply new makeup, then slipped into a pair of pajama pants and a camisole. It seemed daring. Decadent even. I padded into my kitchen barefooted, and poured another glass of wine. Music playing, candles lit, I set about the task of preparing the meal, letting my mind wander wherever it wanted.

It felt strange to be so free. To have free rein. And as I sat down to eat my meal, I realized that I WAS preparing for company after all — a dinner with a girl I’ve never really known. And now, as the evening draws to a close, I have to admit — she just might be the best date I’ve ever had.