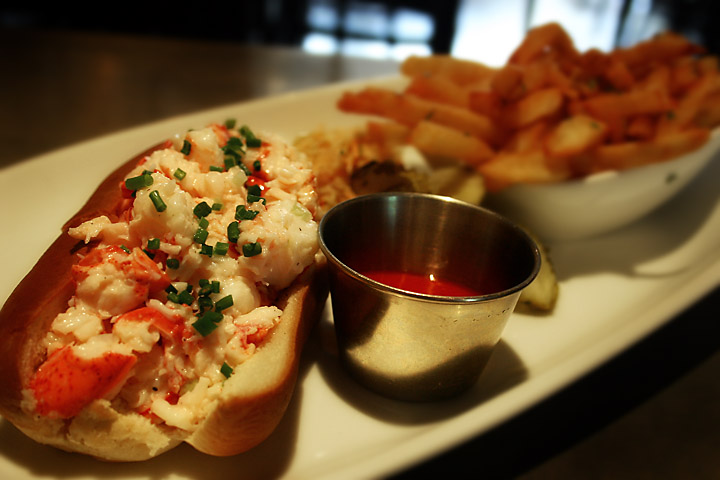 I tend to be fairly methodical in my approach to things. If I want something, I research it until I know every nuance, every word ever written on the subject. Despite coming off as insecure, I tend to know what I like and I’m not shy about pursuing it to the ends of the earth. Once I’ve made my mind up, you can pretty much bet that I’ll get the best I can afford, whether it’s a dish washer or a lobster roll.

So it shouldn’t come to much of a surprise that one of the first things I researched upon arriving in Boston was the best place to have a lobster roll. Boston Magazine listed this one, found at B&G Oysters on Tremont, as the best, and I have to say that looking for it was the best thing that happened to me. It was my first trip out, and I was hopelessly lost almost immediately. Eight hours and about five miles later, the coveted lobster roll was in hand and I knew more about this city than I’ve learned since then.

During the first week, I more or less stayed in at night, but I venture out fairly regularly now. Tonight I had supper in Harvard Square, stopping to buy a book at the funky cool Harvard Bookstore before heading over to wait in line with about 50 other people at Mr. Bartley’s Burger Cottage. I have to admit, the burger was pretty good, and a bargain when combined with gravy fries and a chocolate frappe (Bostonian for milkshake.)

Afterwards, I took the green and red lines to the movie theater, where I caught a late showing of Miami Vice. It was okay. Took about an hour to get into it, and even then, there wasn’t enough hot sex, fast cars, night scenes, and loud music to hold me as enthralled as the television series. Still, every time I was about to give up on it, there was a cool moment, so it wasn’t a bad way to spend the evening. Maybe most importantly of all, I didn’t blink twice about coming out of the theater at 1 a.m. Not even when I learned that the T stops at 12:30 a.m. I just strode confidently outside and hailed a cab. Within five minutes I was home, safely inside after a night on the town.

The scared girl is losing a lot of her inhibitions and fears, and that’s a good thing.

Just for the heck of it, I thought I’d run a few numbers:

Music: We’re no Here by Mogwai