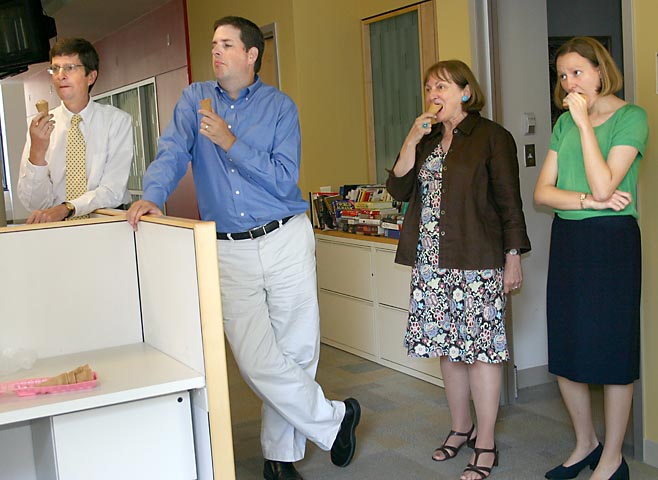 One thing that’s impressed me about The Monitor from the beginning is the staffers’ dedication to veracity and a higher calling. Facts are triple-checked, sources are questioned, ambiguity is attacked, tangled syntax is unsnarled in an attempt to make the final product as accurate and informative as possible. These guys don’t play journalists — they ARE journalists.

That’s why I was surprised when the invitation came across my computer screen today: an ice cream party to be held mere inches from my cubicle. The only requirement? A willingness to fully and completely concentrate on the task at hand, faithfully counting each and every lick.

The purpose? This is National Ice Cream Month, and a junior editor in my section is working on a trivia column about ice cream. When he discovered that the average person takes 50 licks to complete a cone, a senior editor questioned that number, deciding to perform an in-house survey. Since Boston is currently in the grips of a heat wave (yes, it really DOES get hot here), there was no shortage of eager volunteers. After a while, even I got sucked into the fun of it all.

As khaki-slacked guys and pencil-skirted girls gathered around, it was evident they had brought their journalistic sensibilities with them.

Is this scientific? I don’t think this is scientific. Are these regulation-sized cones? The national average is 50 licks, but really, that depends on the size of the cone. I don’t lick. I’m a biter. Can we count bites as licks? I think the lick ratio would be higher if we were outside, because it’s so hot. Was the original survey conducted outside or inside? And what kind of ice cream did they have? Hey, are we counting bites as licks? Ha! Look at the accountant. He’s dividing his into perfect columns of licks AND bites. What about the bite-lick? Anyone else do that? I’m definitely noticing a lick-lick-lick-bite-lick-bite every once in a while. I don’t think that counts. Well you can’t lick the cone. Did they count the cone, or did they just lick it flush with the top? It depends on the cone, you know. There are those flat-bottomed cones and then the pointy ones. Are we counting each bite of the cone as a lick? Are we being graded on this? His is bigger than mine. Can I have another, because my numbers are all wrong. Mine was smaller than everyone else’s. You ever notice that women tend to be lickers and men tend to be chewers? Should we divide this up by a male/female, lick/bite ratio? Can I have another? I was concentrating too hard and couldn’t enjoy mine. What’s this for anyway? It’s for our performance reviews. Arrrgggh. I messed mine up!

Ah, the things we do for the love of our craft. For the curious, the staff averaged 25.5 licks and 9.8 bites. My personal numbers were 15 bites, five licks, and eight lick-bites. But mine were somewhat skewed because I had to hurry to shoot the picture.

On another note, yes, Boston is wicked cool. I’m a little lonely, but I like my job and the apartment is really nice. I would have already posted some pictures, but I forgot to pack my camera. It’s funny… without it, I’m having a hard time processing how I’m feeling and what I’m thinking. I’m looking forward to having it back in my hands tomorrow via UPS, so expect more frequent updates after this — maybe even a few a day if I feel ambitious.

Taking a psychologist’s view of my ice cream method — all bite and lick-bite — I’d say I’m feeling pretty confident. Somehow, some way, I have a feeling I’ll get what I want. What that may be exactly, I’m not sure. But I’ll know it when I see it. Rest assured.