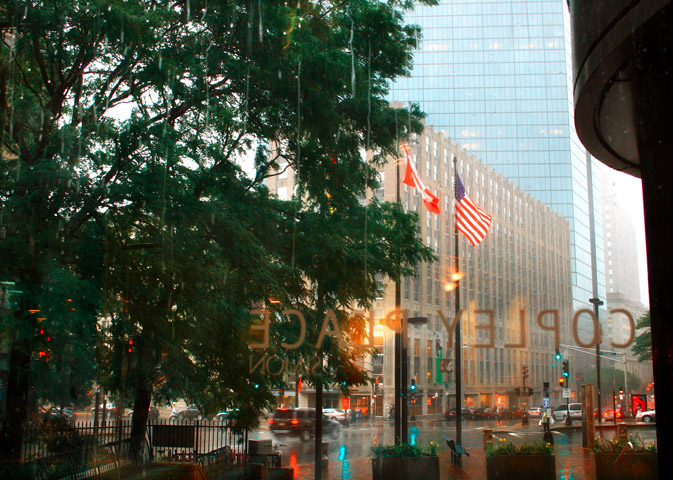 It’s not going to stop

One thing you quickly get used to in Boston is the weather. Basically, it changes every hour, so expect to walk in the front door of a shop wearing a sundress and sandals and out the back door wearing a turtleneck and a rain coat. Sometimes it’s a pleasant surprise, like on Thursday when I endured a warm, muggy walk to work and walked out to 70 degrees, overcast and windy. Friday was a different story.

I spent much of the day engaged in an ill-advised excursion that reached a breaking point by mid-afternoon when — hungry, out of money, feet hurting, lost in Chinatown, unable to reach anyone — it started to rain. The irony of it all struck me, and I started to cry. A Chinese chef was kind enough to share an overhang with me as we waited out the storm, and afterwards, a friendly Boston policeman gave me directions and a hearty, “Roll Tide Roll!” So of course, I did the same thing I do in Tuscaloosa when people do that: I backed away slowly, stammering, “Ummm. Yeah. Alright then.”

Later, with a full stomach, the whole thing seemed a bit silly. After all, I got to see some cool stuff in my trek: both lengths of Commonwealth Mall, Downtown Crossing with the illustrious Filene’s Basement and Lambert’s Market, people milling about Boston Common, men hashing over politics at Boston International Camera, Boston University, Loews Theater, St. Paul’s, much of the Financial District, Chinatown, and some other stuff I don’t remember (I got very, very lost.)

I took the T and lived to tell about it. I even stopped to jot down a few phrases I heard on the street. Most noteworthy? “He’s got me by the f-ckin’ balls. God, I HATE that,” “I’ve been shit-faced since 6 a.m. this morning!” and “God, these shoes are SO WRONG.”

It’s an education, to be sure. I have a feeling I’m not coming back as the same girl.

And maybe that’s a good thing. From the moment I arrived, I noticed that people here don’t smile much. They don’t smile spontaneously, and they don’t smile in response to a smile. At first, it was disconcerting, but I’ve grown accustomed to it and find their blank stares almost comforting. Over and over, I pass people, begin to smile the automatic smile I’ve been taught to force through clenched teeth since I was a child. It’s made me more aware of just how often I smile when I don’t feel like it, offer a moment of banter with a stranger because it’s the nice thing to do. It’s not needed here.

By late afternoon, it was a good thing too, because I was running out of patience. As I limped home from my day-long ordeal, I saw lightning flash through the sky, momentarily connecting Copley Place and the Prudential Tower. Almost instantly, it began to rain. Thick, heavy drops. Blinding. Cold. Awe-inspiring. Biblical.

It reminded me of the movie, “Magnolia.”

And somewhere between that realization and the moment I tripped on the curb and stumbled into the street, almost getting nailed by the cab I was trying to hail, I started to cry all over again. Not the sniffly, whimpery little girl tears of earlier. The half-screaming, half-hysterical, very adult, almost 33 and I’m so freaking lost, contacts are blurring in my eyes and if they slide out I won’t be able to see and I’ll be SO screwed, every cabbie hates me, I’m so freaking lonely, just please let me find my way home kind of tears. The kind where you want to call someone and you think this time you really will, you’ll let your guard down and admit you need someone, and then you realize there’s no one to call. The kind where you know the sun will be blinding afterwards, but first you have to make it through this alive, and you just pulled your last rabbit out of the hat.

When a driver slung a face full of water at me as he careened around a corner, I almost did the unthinkable — I almost flipped him off. For the first time in my life. I realized then that maybe Bostonians don’t smile because life in the city is hard. Between the weather and the walking and the traffic and the noise and the confusion, every moment is spent getting to and from your destination alive. There’s no energy to waste on trivialities.

And at the end of the day, when you’ve managed to do something a little better than flatline, you look in the mirror and smile — at yourself — ever so slightly. There’s politess, and then there’s grit — the girl who can master both isn’t likely to stay down long.

(Incidentally, for the curious, this is the view from upscale Copley Place, where I temporarily sought refuge from the downpour.)

Music: Speed of the Sound of Loneliness (lyrics)