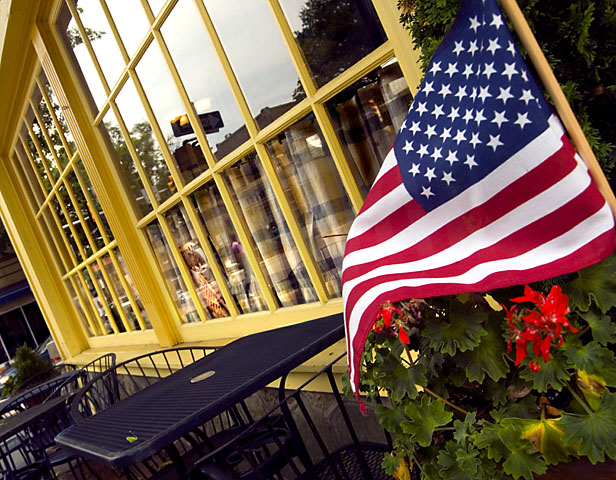 Years ago, when I was at the Gazette, a Korean War veteran held me riveted with his description of lying beneath his bunk, face pressed against the frozen ground, hands aching as he gripped his rifle to his chest and tried to hold his breath, tried to silence the blood pounding in his ears so that he might hear the enemy’s approach. His tent cracked and creaked in the wind, every sound jarring him awake, sending the adrenaline surging in a sickening spike of fear.

“It changes you,” he whispered.

Yes. It does, I thought.

His waxy fingers shook as he traced circles on my desk, tears running down his face as he paused in his story, staring out my window at a world I couldn’t see. I was a young editor. He was an old man. I swallowed hard and kept my mouth shut.

“People die,” he said. “That guy out there wants to kill you, and if you don’t pull the trigger, he will.”

I held my breath.

“So you shoot. He falls. You wait. He cries out or maybe he doesn’t. You shoot again or maybe you don’t. He stops moving, and you start walking. You get a few feet away, you stop, turn your head, throw up, and move on.”

Pale blue eyes met mine and I looked down, etched crosses into the margins of my notebook. Waited for him to compose himself.

“Freedom’s not free,” he said, staring hard into my eyes.

“No one gets that, do they?” I whispered. This time he was the one to break my gaze.

Two years later, on July 6, 2002, I was clearing things out of the same room where I had held that interview, embarking on my own perilous bid for freedom. I thought my life was over. There was no way I could know that it was just beginning.

Last Wednesday, I took my first plane trip, back to the only place that feels as much like home as home. Back to Pennsylvania, where Alec Long and his family let me eat, sleep, read, write, and get my head together in a guest bedroom that is possibly the most beautiful shade of apple green I’ve ever seen.

On Thursday, I spent the morning roaming the trendy downtown area of West Chester. I didn’t feel much like shooting, so I didn’t push it. I just wandered around, snapped a few images, including this one, sipped an iced latte and browsed papers at a streetside café, and then headed over to the local Christian Science Reading Room, where a nice lady treated me like a celebrity just because I had a story in that day’s paper.

When we returned to the house, I washed my hands for lunch, accidentally catching a glimpse in the mirror. The girl staring back at me looked bright-eyed and happy, if not still a little dazed. There were dark circles, but they were fading.

Two hours later, I heard that girl tell her editors at the Christian Science Monitor that yes indeed she would be pleased to fly to Boston for a six-week editor stint.

I returned from Pennsylvania on Monday and will fly out of Birmingham Sunday morning at 6:30 a.m., not to return until Aug. 26. While in Boston, my duties will range from generating story ideas to assigning stories, working with writers, polishing copy, and overseeing the final product for my section.

It’s a profoundly humbling experience. One I’ve barely dared to hope for. If you search this site for the word “dreams,” you’ll find them turn up in every shape and form, from the nightmares that plague my sleep to the fledgling hopes that tiptoe into my days. Fifteen months ago, I posted a list of dreams — 21 of them. Here’s where we stand:

1. I consider this one a pretty done deal. It might not be a farmhouse, but an 80-year-old bungalow is pretty damned close. From the hydrangea blue walls in my bedroom to the golden margarita walls in my dining room, it just feels right somehow.

2. This one is still a work in progress. Getty is currently reviewing my portfolio, and I’m awaiting a response.

3. I haven’t accomplished this one yet, but I did have a photo published in Time Magazine, so I’m not stressing it.

4. Well, it’s not Paris, but a girl has to start somewhere. I’ve traveled by plane and train to Pennsylvania, and driven to Pensacola and Mobile alone. And approximately 96 hours from now, I will be typing my evening post from my very own apartment on Commonwealth Avenue in Boston.

5. I haven’t even tried this one. Must get busy on that.

6. This one is in progress.

7. This one is sort of in progress too. I don’t think the past can be rewritten, but maybe it doesn’t have to be. Maybe I can just accept it and let it go.

8. I haven’t made much progress on these either. I’m struggling with things like this. We’ll see.

9. I’m not sure you ever know when this one happens. In a way, it already has. I changed my own life with the first photo I posted online. And in this weird, wild, wonderful way, I made my own world a better place.

11. I don’t know that I actually care too much about this one. Somehow it doesn’t bother me like it used to. Probably because I don’t care so much about number 10 anymore either.

13. Hmmm. Does taking the train to PA count?

15. I haven’t done this one yet. The closest I came was a warm conversation beneath a starry sky at Valley Forge. And that was pretty damned cool.

16. I still have to do this. And I know exactly how I’m going to pull it off.

17. I don’t know about this one. Just because I rarely cry doesn’t make me any less haunted. Et tu devriez savoir bien meilleur que tout.

18. I count the church fires in this realm, so chalk this one up for done.

19. Really need to work harder on this one.

20. I would if I could. I’m always looking for a way to make this one happen, but haven’t seen it yet.

21. I’m not sure I can ever pull this one off. That won’t stop me from trying though.

I have another list, a secret list, of deeper dreams. Some of those have come true and some are just wild wishes. But for the girl who thought her life ended the day she walked out of The Northport Gazette, the day Tuscaloosa News didn’t hire her (twice), I think life is turning out pretty okay.

So. Flipside. What are your dreams?

Music: Jenny Was a Friend of Mine by The Killers (lyrics)