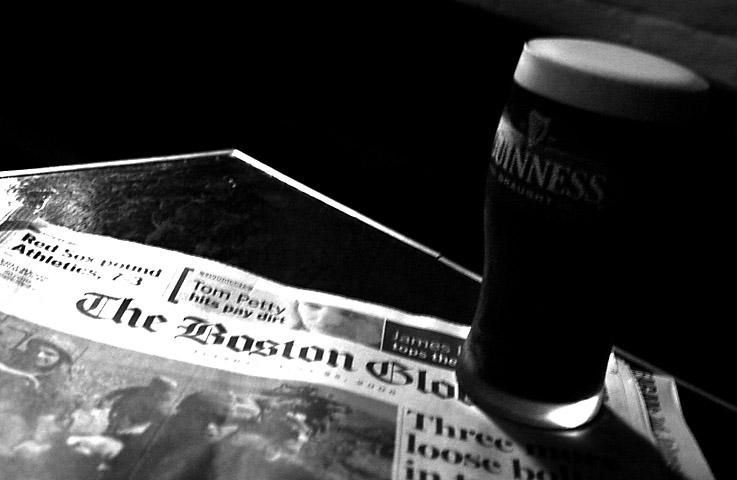 Part of my job involves reading four newspapers a day: The Boston Globe, The New York Times, Wall Street Journal, and USA Today. No one stipulated where I had to do that, so I read yesterday’s paper at Crossroads Irish Pub, one of the oldest pubs in the Back Bay Area. It was dark, but it wasn’t smoky due to Boston’s ban on all smoking in workplaces and commercial buildings within the city. That’s right — you can’t smoke in bars. Even non-smokers such as myself know that alcohol and cigarettes go hand in hand. I rarely have one that I don’t crave the other, and I don’t consider myself much of a drinker OR smoker.

Still, the bar was charmingly hole-in-the-wall, playing all kinds of cheesy music ranging from old Beatles and Aerosmith to goofier stuff like “867-5309” and “Der Kommissar,” which I’ve always loved for its international flair. I probably would have had more fun if I’d gone upstairs to hang out with the MIT/Harvard/Boston U crowd, but I stayed downstairs with the locals, munching a Mass Ave burger (chili, bacon and cheddar — wicked good), and downed two glasses of Guiness. Yeah, two. All I can say is either I’m a total lightweight, or beer here is stronger. I tripped over a guy as I walked out the door and proceeded to unsteadily weave my way two blocks in the wrong direction before I realized what I was doing.

It was nice. I don’t cut loose too often. I’m not really a wild girl, much as I wish I were sometimes. But it was better than sitting at home staring at the wall, and quite honestly, the buzz was kind of nice for a change. It’s been a while.

Music: Der Kommissar by After the Fire (lyrics)