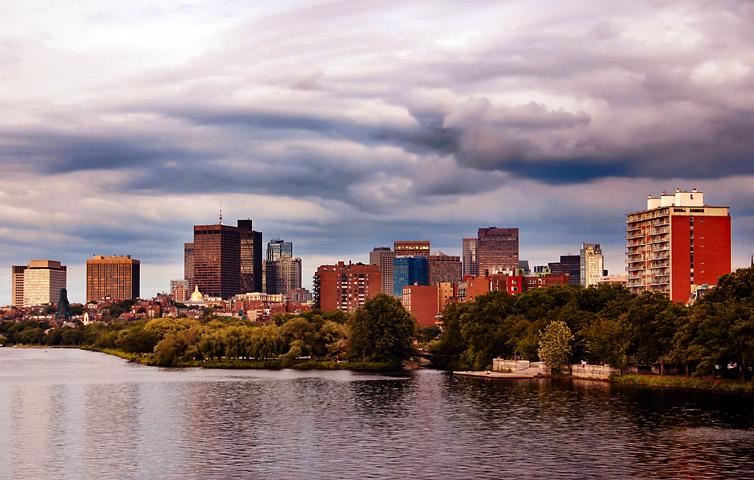 View from Harvard Bridge, looking eastward toward the Esplanade and Back Bay.

So I’m 33 today. I’ve had worse birthdays. Far worse. I don’t remember last year’s birthday or the year before.

As I stood on Harvard Bridge, watching the sky deepen from magenta to tobacco to black, watching the lights come on one by one around the city, it occurred to me that I’ll remember this birthday for a long time.

I almost stayed home. I almost gave up. But something inside of me never gives up. Ever.

I dressed in my nice work clothes and brushed my hair, pondering my plans. On a whim, I carried the camera. And by the time I reached the Charles River and saw the sailboats gracefully skimming the edge of the Esplanade, I knew what I wanted to do. I wanted to shoot and I wanted to walk the rest of the way across that bridge, down along Memorial Drive, past M.I.T., over to the Longfellow Bridge and Kendall Square. At the time, I thought I might go to a movie, but then I saw Legal Seafoods and decided to try their legendary clam chowder, purported to have been served at seven presidential inaugurations. And yes, it really is that good. Truly. I would fly back here, just to have it for lunch.

In an odd twist of fate, someone at an adjacent table was celebrating a birthday as well, and just as my plate arrived, his friends began to sing “Happy Birthday” to him. It was a bittersweet moment that put a smile on my face and set tears dripping into my bowl. That’s just the kind of girl I am though.

On the way back, I had planned to take the red line to Park Street and switch over to the green, but the weather was so nice that when I passed the T-stop, I just kept walking. Lots of people were out walking, jogging, pushing babies in strollers, enjoying being outside, and as I crossed back over, the famous Boston U Citgo sign flashing like a beacon, I felt oddly comforted.

I’m absorbing this town quickly so that in less than a week, it already feels like home. I haven’t gotten lost since my first day out, and I’m beginning to settle into somewhat of a routine. When I finish writing, I will snuggle under my feather comforter and read a few chapters in my book. I’ll drink a bottle of water and then go throw the bottle away, turn out some of the lights, leave a few others on, and crawl back beneath the covers. I’ll pick a favorite dream or two to think about, and in a few minutes I’ll be asleep.

At 6 a.m., I’ll wake up, stumble into the kitchen, make coffee, and get dressed for work. And so it goes. Time passes quickly, and before long, I will be leaving this city. It’s kind of weird to think about, so I try not to ponder it too much.