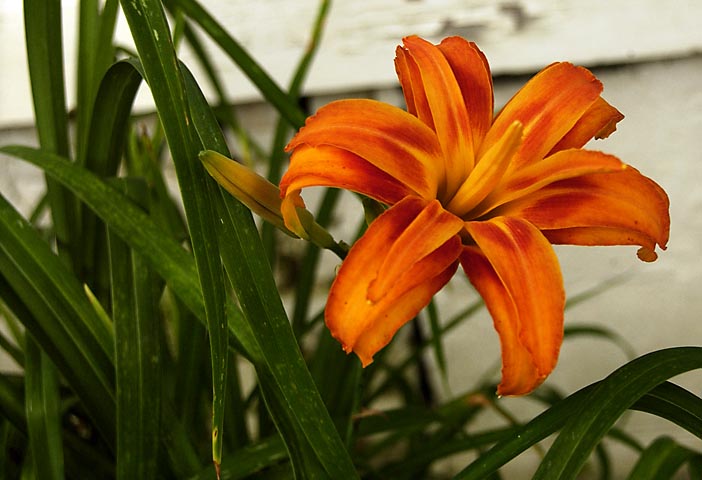 The daylilies are coming along nicely now. This is one of close to 50 planted by the original owners of the house. Most people consider it an inferior specimen because it grows wild along the roads in Alabama, hence the name “swamp lily” or “ditch lily.” Nevertheless, I like it because it requires little to no care from me. Absolutely perfect, because I don’t have it to give right now.

After a week of fatally dark ennui, I find myself once again knee-deep in work. Two weddings booked this month, and two stories for Christian Science Monitor squeezed between. Suitcases opened and closed in a smattering of cities, reservations made, a few fears conquered. By the time I get the chance to lift my head, I’ll be blowing out 33 candles.

I’m in a strange phase right now, the highs mixing with the lows, the failures clipping the triumphs. One minute I’m ducking into the shadows, and the next I’m throwing myself off the highest peaks I can find. I crash, I fly, I crash again — scratching out the signature of my life in blood, in rain, in pixels, in words.

People who know me well can tell you — a handwritten letter from me likely took a full day and at least a dozen sheets of paper to write. I stumble over my letters fitfully, trying again and again to tame my scrawl into something more legible, more acceptable. I weigh my words carefully, throwing them softly at first, then harder and harder, until I’m sure they’ll land where I intend.

But like the wild ditch lilies that spring up every year — long after the owners are dead and nothing but concrete foundations remain — these are the things I will leave behind. The only legacy I have. I don’t care if people remember me as a great writer or photographer. I just want the people I love to be able to find the echo of my voice in the dips and curves, to trace the contours of my signature in the darkness of the night and know that I am always with them, just a fingertouch away.

I don’t know what else can be done. I feel so down suddenly. I’m excited about the upcoming work, but terrified of the challenges that lie ahead. Fear tinges my words, and it’s tempting to censor but I won’t. Not tonight. Fake smiles and glib offal have been my purveyance for far too long.

I’m muddling through words because I’m having a hard time writing. I’m struggling with syntax because my mood is crashing. And you know, guys, it’s almost 2 a.m. I feel nauseated and light-headed, as I do so often when I write. Night noises are setting my teeth on edge, and this is coming far closer to resembling the disjointed mish-mash of my personal journal than my “pretty” CloudyBright writing.

I’m sorry. I don’t feel well. And I’m not quite sure how you turn a swamp lily into an orchid or an ink smudge into a masterpiece.

In the end, maybe you don’t. Maybe you just let it stand there and be whatever it will be — out of place among the finer specimens, swathed in over-saturated frippery to hide the awkward nakedness. With hands raw and bleeding from the effort, tears blurring my keys and muscles shrieking a tense protest, it will have to be enough. I have nothing more to offer.

Music: Every Day is Like Sunday by Morrissey (lyrics)