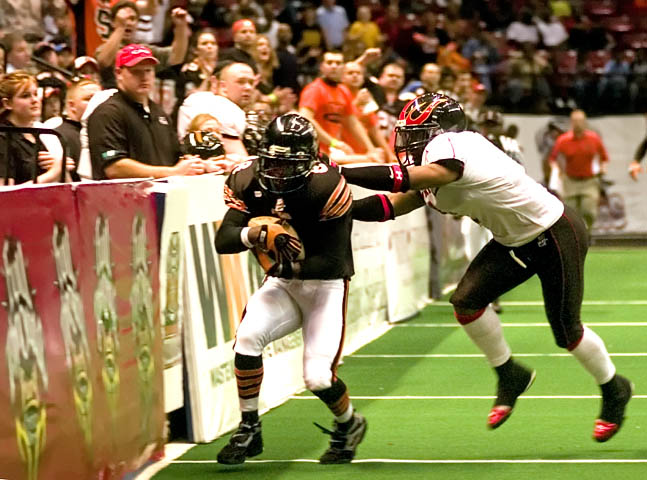 I feel like I should write something pithy and insightful. Something that will earn the coveted title of “writer” with a capital “W.” It’s not happening, and quite honestly, I doubt that it will tonight. I only get so many rabbits to pull from the hat, and I think I’ve used my quota.

Most of my week has been spent producing the story that goes with this image — my second piece for Christian Science Monitor, “Football team wears faith on its sleeve,” which appeared on their site today.

I have other snippets of writing floating here and there, to the great detriment of my photography. I’ve never been much for hand-eye coordination. You should see me play baseball — I was the only kid on the team who had to close my eyes in order to hit the ball.

And so it was this evening that my friend Kevin called to tell me the clouds were spectacular following a thunderstorm that left most of my yard strongly resembling the Nile.

Absent-mindedly, I wandered around Books-A-Million, half-listening and half-cursing in my head. The truth of the matter was, I wasn’t thinking about photography at all. I was thinking about writing. Or more specifically, not writing, which consumes almost as much of my time.

I’ve learned enough to know that I’m in the purgatory phase of writing now. My story has hit print and the next project has yet to materialize. It’s a slippery slope where I start pondering high places and sharp, pointy objects. I was looking for inspiration, another writer. Anything to arrest the gathering darkness lapping at my heels. I couldn’t find the book I wanted.

Dragging my fingers across the book covers — slick, dusty, rough, smooth — I closed my eyes and wandered the aisles. I used to work in this store. I know it like I know my own house. Maybe better. I was a writer when I worked here, soaking in the words like bread pudding absorbs Grand Marnier. Harper Lee and William Faulkner. F. Scott Fitzgerald and J.D. Salinger. I read my share of junk fiction too. John Grisham and Anne Rice. Anything with a strong sense of place, preferably steeped in mint juleps and dripping with Spanish moss.

I was fairly thin then, and during breaks I would often perch high atop the gray, plastic crates we received from Ingram, our main supplier. With one leather-booted foot crossed over the other, I would drink the words in rapidly, lost in a world of heady syntax and second-hand smoke as my co-workers sat scattered in folding chairs below, grousing about customers and clutching Chili’s takeout menus to their breasts as if they contained the secret to life.

And now, here I stand, like a junkie returning to the streets — wild-eyed and sleepless, craving a fix and swearing I’m going to stop. I said I’d never come back to this place, this high precipice that fills me with far too much pleasure as I dangle over the edge. I lose myself in this world too easily. Become immersed. Obsessed. I don’t eat or sleep or laugh or play. I certainly don’t shoot. Not for pleasure, anyway.

The words become all-encompassing, whispering incessantly in my ear, demanding purchase. Characters flit through my conscious, suggest plot treatments and dialogue. Everything becomes a story idea until I can barely hold a normal conversation. I spend a lot of time pacing aimlessly and muttering to myself, running my hands through my hair repeatedly until the morning’s squeaky-clean flyaways have succumbed to limp, greasy strands by mid-afternoon. Sometimes I just throw myself across my bed, stare at the wall, and trance out.

I think this drug will kill me someday. The highs are too high and the lows are too low. Ah but the rewards — they bring their own unique pleasure-pain dynamic that almost seems worth it sometimes.

To those who nominated Cloudybright in the 2006 Photobloggies for Best Writing of a Photoblog, thank you. If I can call myself a writer at all, it’s because of you.

I thought I could walk away.

I keep thinking I can walk away.

And somehow, you keep luring me back. Like a kitten with a string, I’m helpless against the intoxicating pull. Feet over tail, I tumble, lost all over again.