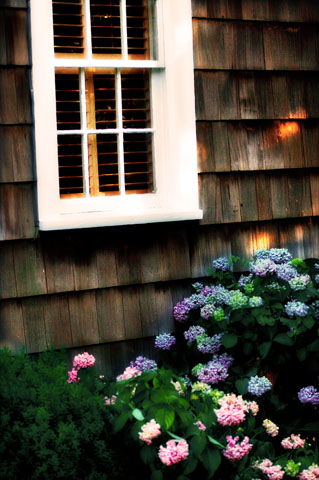 Marvin doesn’t see much anymore. Hasn’t seen anything in years. Not beyond shapes and shadows.

When I crept into his courtyard this afternoon, I was surprised to see him outside, sitting quietly at his patio table, petting his cat, Tiger. Looking back, I realize that was the photograph — the late afternoon sun slanting across his thin, blue-veined arms, his pale blue eyes half-closed in contentment as he stroked the brindle calico that is his only companion.

Marvin doesn’t have a shortage of guests — people like me are always poking around in his garden, scoping out his yard for photo ops, picking his still-agile 80-something mind for preservation advice or tidbits of local history. Whether he has actual friends — the kind who will sit and listen for hours just for the pleasure of hearing his voice — is anyone’s guess.

I was bent on taking a photograph of blueberry pie and wanted to plunk my plate on the sturdy white newel post at the foot of his stairs, American flag whipping behind it as a homage to patriotism. I wanted to create a classic image of Norman Rockwell Americana. What could be more American than mom, dad and apple pie — or blueberry cobbler, Southern front porches, and Old Glory?

I called out to him, disturbing his reverie. He waved me into his lush green courtyard and told me to take what I wanted. A Southern gentleman. Truly.

I wish now that I had left my camera in the car, just sat at his feet listening to stories about how his great-great-grandmother watched from the front parlor window as Gen. Croxton marched Union troops down Main Avenue on their way to burn the University of Alabama campus. I wish I had taken the time to ask him about the schoolmaster’s ghost that resides in the desk that stands in his den. When I was a writer, I spent a lot of time listening to people. Asking questions. Letting them weave their tales around me, letting them draw me into their worlds. I miss that.

In the end, the photographs were disappointing, with this throw-away image being the best I have to show for the day.

I have no idea what Marvin has seen outside his windows. And you know, I — of all people — should have asked. All around us, people are dying to tell their stories, waiting for someone to ask the right question, to stop and look them in the eyes, touch them on the hand, share a cup of coffee or a bit of cake. People are so lonely. So alone. And I think in his own way, Norman Rockwell knew that. In his paintings, he captured the kind of life we all wish we had had. Classic holidays filled with family and love. A set of ideals that don’t seem to exist anymore.

I was born 50 years too late, and never do I feel it more strongly than on holidays. I don’t have any good Memorial Day stories, but I bet Marvin did.

Music: Speed of the Sound of Loneliness by Amos Lee (lyrics)

Image Envy: The Lynx by Michael at Macro Art in Nature