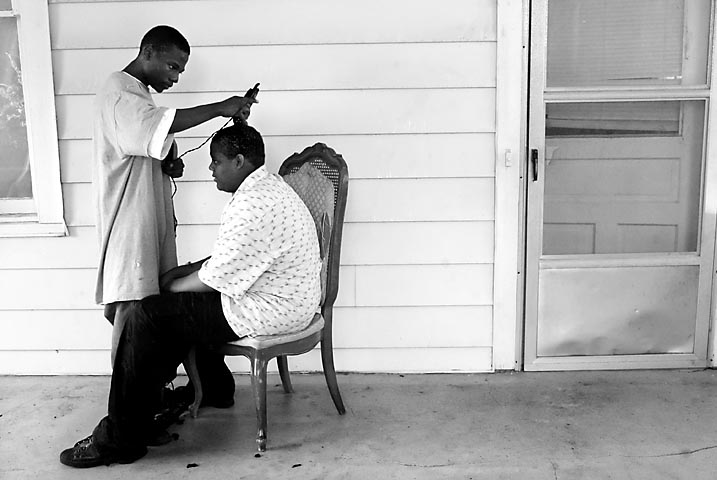 The smell of fried catfish wafts across the wide front porch, up to the beadboard ceiling and then down, past the white clapboard walls and out beyond the cracked sidewalk to 30th Street.

At the edge of the porch sits a gaggle of girls, swinging their feet in rhythm with the steady buzz — 15-year-old Ken Davis is getting a haircut, and on a Sunday afternoon with nothing better to do, this is the height of entertainment.

He doesn’t mind. He’s hoping to turn a few female heads at Echols Middle School with his debonair new ‘do anyway.

Still, it’s a bit nerve-wracking letting a relatively green barber cut your hair, even if he is your best friend. Hunched forward in an old straight-backed chair borrowed from the kitchen, Davis tries to look nonchalant as Trendarius Lee, 16, drags the Conair electric clippers across his head in slow, even strokes.

“I’m actually pretty cautious about doing this,” Davis admits, rolling his eyes up towards his brows in an attempt to check out the progress. “I usually only let professionals cut my hair, but since he did a good job with my brother…”

His voice trails, interrupted by a flurry of giggles from the spectators. In a torrent of chatter, they explain how Lee is developing quite the reputation as a barber. Their words tumble fast and free as they finish one another’s sentences. “Last week, he cut four people’s hair. Four! All in the same day!” Their voices take on a solemn, reverent tone. “One was even a baby.”

He bites his lower lip as he pauses to concentrate on a tough spot, then he steps back to rake a critical eye over his handiwork.

“You might oughta cut those scraggly edges,” Davis offers, running a hand across his head. “But people say I do look better with a little ‘shag.'”

As Lee alternates between two sets of clippers, Davis explains that one is for lining and one is for adjusting. “You don’t cut hair with liners,” he says. “‘Cause they only cut one way — bald.”

Davis will be in school tomorrow, and after that he’ll be at the Highway 43 McDonald’s, where he mans the front register. With any luck his new look will be a big hit.

“I’m just 15,” he says, standing up and brushing the hair from his pants. “I’m not going to be at McDonald’s my whole life.”

A mirror is called for and one of the girls leaps off the porch rail and runs in the house, banging the screen door behind her. The heavy perfume of greasy-good catfish fills the air and reminds everyone that it’s almost time for supper. The sun is starting to set and all across Northport, people are shifting into evening. Another weekend draws to a close.