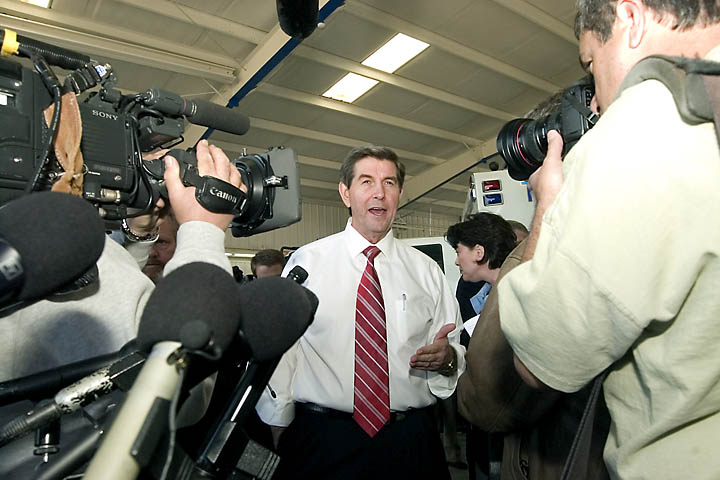 The insanity of the media blitz. The thrill of rubbing shoulders with reporters, photographers, and editors from Atlanta to New York. The stress of the deadlines. The relief as it all winds to a conclusion. The governor’s smile says it all.

One month ago today, I sent a proposal to a dozen publications, offering to cover the Alabama church fires.Since that time, I’ve been primarily working with one major client and a few minor ones. This photo was shot for the Associated Press. You can see the others that hit on the wire or perhaps even in your local paper this morning.

Mostly though, I’ve been writing, and writing, and writing. Which is part of why you haven’t seen much writing here. There’s just no energy for it at the end of the day. As soon as I have an all-clear on my story, I can tell you where and when it will appear. I’ll also post a slideshow, but not yet. Not yet.

For the moment, at least, suffice it to say that it has been a wild, wild ride, filled with blood, sweat, and tears. Literally.

I have given my heart and soul to this story. I’ve chased geese, grilled politicians, nailed leads, cursed dead ends, and banged my head against more walls than I can even remember. I’ve put more than a thousand miles on my car. Spent every dime I had and borrowed twice as much (I WILL pay you back. I promise.) I’ve been been wildly happy, mind-numbingly low, kick-ass confident, and scared witless.

And somewhere in between it all, I saw a few pieces of myself. That cocky editor-girl I used to be.

I’m dead tired, but my reward will come soon enough.

By the end of April, if all goes well and the sky doesn’t fall, I’ll be speeding through a starry night to the adventure of a lifetime (for me, anyway). And yes, you’ll know where in due time. When I’m ready. When it stops being a happy daydream and I actually believe it. Suffice it to say that it’s been a long time coming 😉