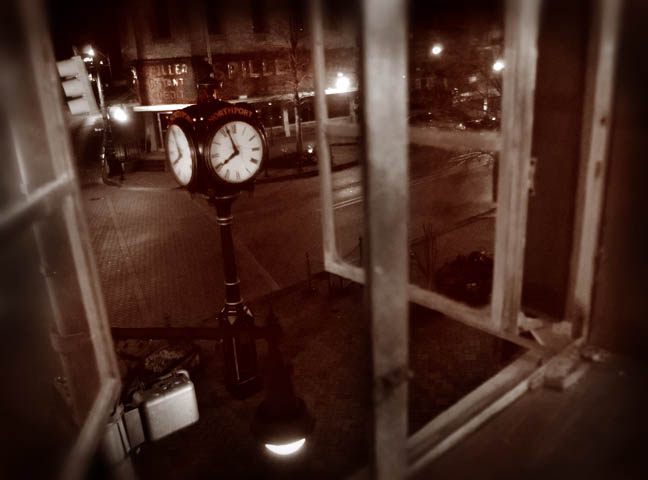 Of course it wasn’t the same window.

That window was long gone. Reduced to a pile of rubble and smoothed beneath an expanse of asphalt as deep as memory itself. But the same rain fell — a fine mist that clung to her hair and traced rivulets onto the worn hardwoods beneath the casement.

Laughter rang through her head, and she put a hand to her temple to stop the sound. It didn’t matter. What had been was over.

“Will I see you again?” she had asked, and he hadn’t had the guts to say what they both knew.

Remembering, she pressed her palms into the metal frame, coaxing the blood to the surface as she stared down at the street below.

“Jump,” he had said. “Find that place in your head where there’s nothing but the sound of my voice, close your eyes and jump.”

He meant figuratively, of course. She used to tease him about his metaphors.

“Propensity for pomposity,” she would scoff. And he would smile and continue his course, ignoring her protests until she threatened to nail him to the wall and kiss him just to shut him up.

She had jumped a few times. Landed on her feet mostly. But this — this was something else entirely.

“Jump and the net will appear,” he had said.

In the end, he was the first to make the leap, leaving everything for a dream she couldn’t understand.

“Another life, another time,” she muttered to herself, turning away from the window. Unfinished canvases lined the shelves, leaned against the walls like corpses. Paints lay in dried up tubes, scattered violently across the floor.

“Dreams never die a quiet death,” he had said as he idly sketched her profile while she leaned out his window, catching raindrops with her tongue. He should know, damn him. He should know. She didn’t have to write to ask. He had left the charcoals in their teak coffin the day he walked away.

Suddenly she was on her knees, ripping the canvases with bare hands — for him and for her and for everyone and no one — slinging them out the window, into the world where he should have landed. The world he always said was hers for the taking.

He had chosen a glass prison. A slow, comfortable corporate death. Traded passion for security. Traded her for —

There was no use in walking this path. Things are what they are, he would say.

And so they were.

She dragged herself to her feet and stood in front of the window. The rain had stopped and the fog was rolling in. Hand trembling, she reached out into the blackness like she had so many times before and slowly, so slowly, pulled the window shut, the lock sliding into place with a dull finality.

Backing to the wall, she reached for the light switch, turned off the lights, and slid to the floor.

“When did you stop believing in Paris?” she asked, but he didn’t answer. He didn’t have to.