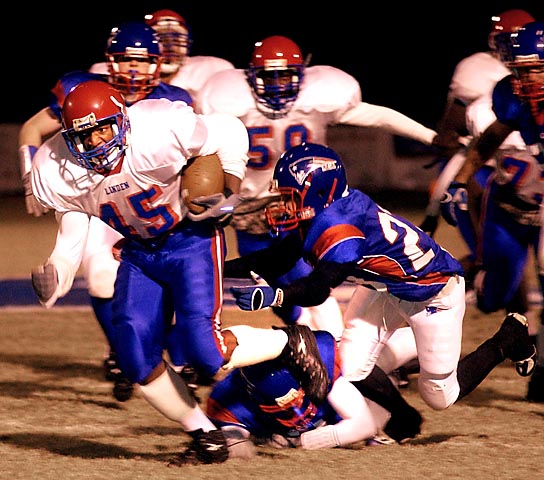 Legend of the fall

Every year when the weather turns cold, I inevitably find myself standing on a football field somewhere thinking back to the boy who started it all. The following was originally written for The Northport Gazette four years ago.

When I saw the slanted handwriting, scrunched haphazardly on the envelope in the trademark Bic blue, I didn’t think too much about it. My closest high school friend had recently moved to New Mexico, so I figured this was a letter to let me know of his safe arrival. A quick glance at the postmark confirmed it — Santa Fe. I tossed his letter on the table and sat down to pay bills, but something nagged at me to open it. I was stunned by what I found inside.

One neatly folded sheet of paper, typed on one side, bore these words on the other —

“I am so sorry to be the bearer of sad news; call me if you need to talk…”

With irony, I noted the semi-colon. Only Stephen would use such formal punctuation in a note to a friend. I took a deep breath and opened the letter. True to today’s technology-driven world, it was a printed log of an internet chat between Stephen and his mother.

Stephen’s mom: I saw Dale’s mother at the library today. She said Dale was in town last week for a funeral of a friend from high school. Michael.”

She proceeded to tell him how the funeral was for a classmate of his and how his friend, Dale, was really distraught about it. Stephen responded that he knew I would be upset too as I had fallen quite hard for Michael when I was in high school, even though I was a grade younger.

Tears welled in my eyes at that point, and I had to stop reading. I hadn’t believed it until I got to that part. I kept thinking that somehow it must be a mistake, another classmate. Not Michael. It couldn’t be Michael. He was invincible, legendary. A football player, president of the National Honor Society, a senior notable, a member of the math team, the physics team, the French Club, Mu Alpha Theta — every guy’s buddy, every girl’s dream, the boy next door.

Partially because of him, I became a member of all of those things too, not because he noticed my presence, but because, like everyone, I just wanted to be near him. It didn’t matter if he spoke to me or not. I was perfectly happy just to see him smile.

Sometimes if I close my eyes, I can still see him. In the fall, when sun-lightened hair starts turning darker and the hazy summer days give way to brisk October evenings, I can hear the sounds of the band playing in the bleachers, see him look across the field and lift his head ever so slightly, as if listening to the wind. Somewhere nearby, a girl is standing on the sidelines, Nikon in hand, smiling despite the biting wind. If he were to look, he would see her. If she were to speak, he would notice her. But it makes no difference. This is the pinnacle of happiness for each of them — following their dreams. It doesn’t get any better than this.

Of course, it wasn’t always that way.

When I was first asked to shoot my high school’s football games for the local weekly, I wasn’t all that interested. I liked football well enough, but to go to a game — four entire quarters — and spend Saturday feverishly writing it before rushing down to the suburban field office to stick it in the drop box — I wasn’t so sure I wanted to do that. Then I remembered. Michael would be there. I learned the ins and outs of pushing Tri-X film and wrangling statistics from the coaches, and somewhere along the way, I learned to love football.

Sometimes, if I waited around long enough after the game, Michael would give me a ride home since we lived on the same road. He was always nicer then without his friends around him, and I often wondered if he would have gone out with me on one of those nights if I had had the courage to ask. He was surrounded by people so much of the time, but he sometimes seemed like the loneliest person in the world. I always thought I could change that.

“Stephen’s mom: It seems he was in California in the Marines when he shot himself…”

He had skipped graduation and went to Annapolis on a Naval appointment, working his way through the ranks to become a Captain in the Marine Corps. He never married. While everyone else spent Labor Day sailing and swimming and hiking and fishing in beautiful Dana Point, California, he stood in front of his picture window, looked down at the peaceful harbor below, and put a bullet through his head.

Stephen said he was surprised because Michael had always seemed to be a “ladies man.” He had been popular and well-liked, a sunny golden boy with a brooding, Byronesque misery that most everyone thought was an act. A hundred people would have helped him if only they had known. Any one of them, me included, would have taken a collect call at 3 a.m., if he had dialed the number.

He left behind a mother who loved him, a sister who looked up to him, a father who was proud of him. He left behind cousins who wanted to follow in his footsteps and friends whose lives he changed. And he left behind me — a girl he never really knew, but who cared about him just the same.

When I look back upon my life, I have many regrets, but the one area I always look upon with a sort of muted satisfaction is my last conversation with Michael. He came back to my high school during his Christmas break to visit his favorite teachers. I was a senior at the time, newly single after breaking off a relationship because of lingering feelings for Mike. Word of his arrival spread like wildfire. You would have thought that Jesus himself was paying a visit to our hallowed halls.

My Spanish teacher caught someone whispering in my ear and asked what all the commotion was about. “Michael is here! Michael is here!” one of my friends proclaimed. “She needs to go see him!”

“Of course, and so she shall,” my teacher said, smiling. My longstanding obsession was something of a legend at the school. I guess she figured that if history was about to be made, far be it for Spanish to stand in the way. Before I knew what was happening, a bevy of hands was pushing me towards the door, out into the hallway that led to the crowded auditorium where he was purported to be visiting during the last half of an assembly. Suddenly, I was standing before him, ready to say the words I knew must be said in case I never saw him again. And so, with heart pounding, I dumped them in a torrent at his feet.

“I know that it probably doesn’t matter to you one way or the other right now, but someday there will come a time when you will be sad and you will be lonely and you will be scared and you will think that nobody on the face of this earth loves you. And when that time comes, I want you to remember that no matter where our lives have taken us, no matter how far apart we are, I will still care.”

It wasn’t the most polished of speeches, and it wasn’t a real wise move to deliver it amid a throng of people, but I spoke my heart as plainly as I could and left it for him to take or leave.

My heart was crushed, and though I eventually forgot the pain, I never forgot the boy.

Friday night, I will shoot the dirt-streaked faces of high school football players. Saturday I may photograph boys washing cars in preparation for hot dates. Sunday I may photograph altar boys at Holy Spirit. And in all of their faces, I will see the shadow of the boy down the street who I once knew and loved.

The “Michael” chapter of my life closed forever that day, but somehow it was fitting for it to end with those last hasty words I managed to stammer out to him. My only regret is that he didn’t remember it when he needed them the most.