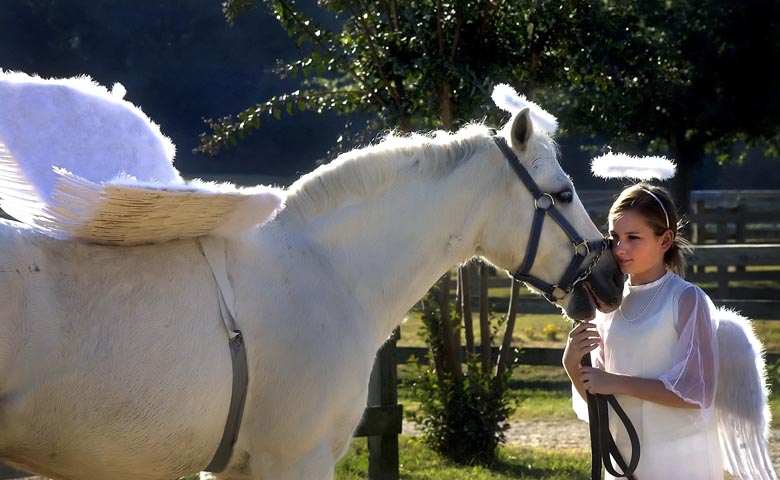 She didn’t see me watching as her as she stood alone with her beast, the dust billowing behind her and shimmering in the afternoon sun.

The assignment called for me to photograph the stable’s annual costume contest, so I showed up, camera in hand and heart in throat. As I approached, peals of laughter poured from the stalls and frivolity reigned. Horses were dressed as everything from tacos to beer steins. Tiny girls flitted gracefully among the heavy hooves, darting here and there as they put last minute touches on their regalia. One girl slipped into a fur coat and draped a heavy silver necklace over her steed’s neck as he bent his head down towards her. They were rappers. Another thoroughbred’s ample rear swaggered beneath the split tail of a hospital gown, offering not much more coverage than it might have given the human patient for whom it was made. The silliness made me laugh, but it wasn’t the mood I wanted. It wasn’t the photograph my soul sought.

Then I saw them, the girl and her horse. The world went silent as I watched her kiss his velvet muzzle, lean against him and close her eyes. I wanted to make the moment last forever, to make time stand still so that I might preserve the purity of that love for eternity.

I wanted what she had, just one more time. And for 1/400th of a second, I succeeded.

Music: Doesn’t Remind Me of Anything by Audioslave (lyrics)