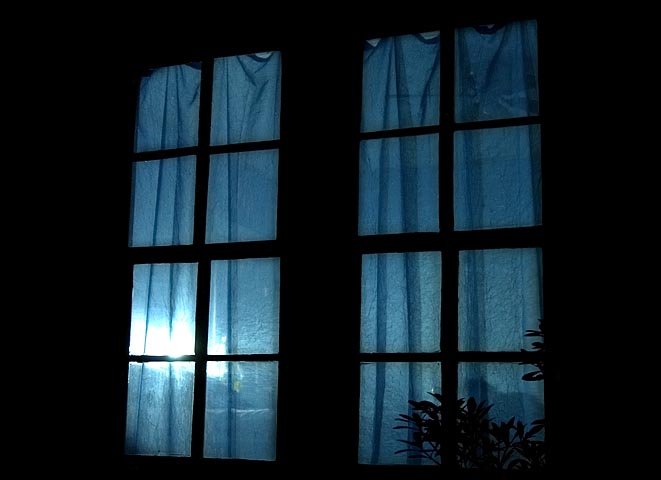 Everyone needs a place where they can feel secure, comforted, safe from whatever storms may come. Even in the worst of times — when I can barely lift my head — my soul craves these things, somehow manages to cobble them together from whatever scraps I am given.

I am the kind of girl who unpacks all of her things and puts them neatly away the minute I arrive at a hotel room, even if I’m only staying one night.

I am the kind of girl who curls up in the porch swing with the Fall/Winter edition of the L.L.Bean catalog, dreaming of roaring fires, down comforters, warm flannel and happier times.

I am the kind of girl who cries over Hallmark commercials, Norman Rockwell prints, and episodes of The Waltons.

I am the kind of girl who will try to make a house out of a pile of sticks if you leave me alone long enough.

So it should come as no surprise that with Hurricane Katrina bearing down on Tuscaloosa Monday afternoon, I was hard at work preparing the bedroom. The rest of the house was a disaster and my inner state wasn’t much better, but I was bent and determined that Nicholas, my kitties, and I would have one shred of sanity, peace, calm within the storm.

That decision proved to be a good one.

As the rain lashed the old wooden windows of my new home, I alternately unpacked and kept an eye on the darkening skies. Monday evening we lost power, and by Monday night we were facing heavy winds and torrential rain. Even here in west Central Alabama, we saw sustained winds of 55 mph with gusts up to 75 mph — strong enough to down more than 400 trees in our city and knock out power to 69,000 Tuscaloosa County residents.

Fitfully, I tossed and turned in my bed, listening to tree limbs, pecans, pears, and various other objects pummel the roof. Outside my bedroom window, I could see transformers showering the sky with blue sparks as the wind took them out one by one. With no phone, no internet, and no electricity, the storm seemed even more fearsome. Rain dripped from the newly painted ceiling, beat a steady staccato onto the freshly scrubbed floors. Hours crept by as the storm gained intensity, ebbing for a moment, only to return with greater fury. By the light of my BlackBerry, I tapped out frantic emails — mostly to keep myself sane rather than any real attempt to communicate.

I was almost surprised to wake up to the sound of voices outside my window the next morning. Somehow I think I thought we were all going to die. I can only imagine how terrifying it must have been for people who truly bore the brunt of the storm. Stumbling out onto the porch, I saw my neighbors pointing at my roof. Large branches lay scattered across every surface and strewn throughout the yard, but the roof was still there.

“Welcome to the neighborhood,” said one neighbor, laughing. “Looks like you’ve got a yard to clean.”

A few minutes later, my new landlord arrived to survey the damage.

And that was that. I was a member of the fraternity. A resident of Ninth Street.

Over the next few days, I got to know my neighbors well. My house is like most on the street. It is 85 years old with all of the quirks you might expect from a structure that has seen a century of hard living. One of those quirks is that of the 15 windows in the house, none of them open. The few that have not been nailed shut have been painted so many times that they will never open. Besides, I caulked any chance of that to hell and back last week.

We were living in a 1940s time warp and in its own weird way, it was comforting. Mornings were spent scrounging up what we could for breakfast, then carrying it out to the porch so that we might bask in whatever breeze was available. Afternoons were spent standing among my neighbors, musing about the progress Alabama Power was making with the outages. Without access to television, internet, or radios, none of us knew much about the devastation Hurricane Katrina had left behind along the Gulf Coast. We knew it had been bad. That was it.

I knew that my childhood home was fine but that my grandparents’ home near Bayou La Batre was standing among 20 acres of marsh grass and knee-deep river water filled with snakes, alligators, stoves, refrigerators, and the remnants of what had once been people’s homes. People’s lives.

I knew that my grandparents were tired. Discouraged. But thankful that they had fared better than they did during Hurricane Fredric, which completely destroyed their home and mine in 1979.

I knew that my family was going to be okay.

Meanwhile, life in Tuscaloosa slowed to a crawl.

On Wednesday night, I walked outside and saw the stars. I never could see them at River Run because it was too bright. Since it was too hot to be inside and there was nothing better to do, I grabbed my camera and my tripod and started shooting. After a while, my gaze turned to my bedroom window, my Coleman lantern shining through the pale blue curtains like a beacon in the darkness.

And for the first time in a long time, I felt like things were going to be okay.

Power was restored to our street late Thursday night, and many of us walked up to Main Avenue to thank the Georgia Power crew for their hard work. On the way back, I asked my next door neighbor if the return of electricity would mean the end of the community spirit that had bonded us.

“Nah,” she said nonchalantly. “It didn’t have anything to do with the power being out. This street is just like that.”

And I couldn’t help but think that maybe, just maybe, I have found my own safe harbor.

The finished bedroom (as it was that day, at least) can be seen here.

Music: Lay Your Hands on Me by The Thompson Twins (lyrics)

Favorite Pic: “Peek-A-Boo!” by Kenneth at Dalicasso and “Swallowtail” by RegularJoe.