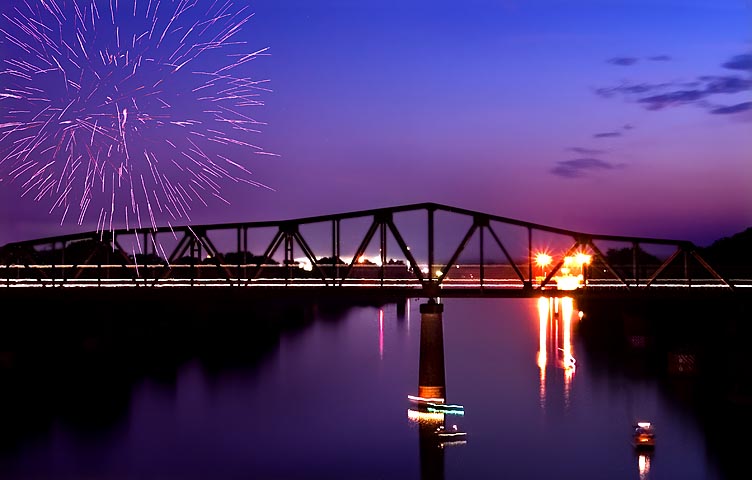 Some days nothing goes right. And sometimes that’s perfectly okay.

This was one of those days.

I woke up at noon disoriented and out of sorts after only a few hours of sleep. Two cups of coffee later, I thought things might be improving.

The day was wet and dreary, my lunch made me ill, a snarky email hurt my feelings, and Nicholas and I had an argument that resulted in quite a few harsh words and way too many tears.

Through it all, I kept thinking about how different this Fourth of July was from last year. I was heavily entrenched in preparing my portfolio for a job I wanted more than anything. Porfirio had just given me my tripod, and he and I met downtown that night to shoot the fireworks together for the paper. He got the fireworks shot, but I got the front-page photo and a new addition to my portfolio. It was a good night.

To my left, the lights shone brightly at the paper. Cars were gathering in the parking lot and I knew that soon staffers’ children would be running through the newsroom as reporters put the finishing touches on their stories and page designers flowed copy and left holes for the images that would arrive later. Somewhere down below, the staff photographer for the night would be lining up his shot, staking his position, checking equipment, stressing over making the tight deadline.

I had not checked anything at all.

I fired off a few frames of the trestle before my first battery died. I fired off a few more frames of the fireworks before my second battery died. It didn’t matter anyway. I had miscalculated the location of the fireworks, hoping to get a shot of them over the trestle, only to discover that they were too far to the left to make the shot that I had envisioned. Standing on my ladder, looking over the fence into the murky depths of the Black Warrior River, it occurred to me that my life isn’t going very well right now.

But then I saw Nicholas looking up at me with so much love that it took my breath away. In truth, we had the best vantage point in the city. The temperature was just right and we had spent all afternoon making up from our argument. Things weren’t so bad. So I came down from my ladder and watched the fireworks display for the first time ever as a regular citizen — not as a reporter, not as a photographer, not as an editor, not as a freelancer. Just a girl and her boy and a D1H with two dead batteries.

The image that you see today is not a true image, but in a way it is truer than any other image I could have posted. It is a composite of two of the frames I was able to capture before my camera died. I told Nicholas my vision and he helped me make it happen through the magic of Photoshop. It would not have been ethical to create this image for the newspaper, and purists will say that it shouldn’t have been created at all.

But when I look at it, I see the merging not just of two images, but also of two lives — Nicholas and I at our best. He gives me Photoshop pointers and I provide images for his projects. He designs my promotional materials and I rewrite his copy. He kills the spiders and I pay the bills.

We’re a team. And maybe it doesn’t have to be any more complicated than that.

Site News: Speaking of teamwork, thanks to everyone who voted for Jui.cc’d in this week’s Photo Friday competition. I am pleased to announce that it marks my second Noteworthy, which means little in the overall scheme of the world but is cool nonetheless. To see the other winners, click here.

Pic of the day: “Vincent” Bob at No Traces and “Ooooh!” by Andrew at Ping-Pong.