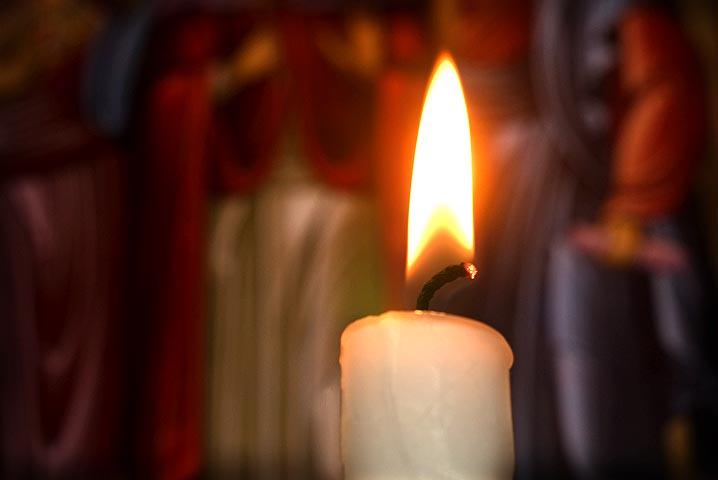 A candle flickers in front of an icon of St. Cecilia, a virgin martyr recognized by both the Catholic and Orthodox churches and believed to have lived in the second or third century. Legend has it that after being forced into marriage by her parents to a pagan, she refused to consummate the marriage, telling her new husband that an angel guarded her body and protected her.

Eventually, she managed to convert both her husband and his brother. When they were killed, she was sentenced to death by suffocation for burying their bodies. After failing to succeed, her executioners attempted to decapitate her in the bathroom of her home, striking her three times with a sword before leaving her to linger for three days in a pool of blood. She is buried in Rome on the Via Appia in the Catacomb of Callistus. She is the patron saint of music and musicians.

In the Orthodox Church, converts are given permission to choose their patron saints. It is a commonly held belief however, that the saints choose you themselves. Whatever the case, St. Cecilia is my patron saint and this will be my last post from Tuscaloosa. The next time I see you all, my feet will be on Mobile soil.

Music: City/State iPod Mix: Take Me Home Country Roads by John Denver, 29 Palms by Robert Plant, Why Georgia by John Mayer, Turn the Page by Bob Seger, America by Simon and Garfunkel, America by Will Hogue, Biloxi by Jack Ingram, California Dreamin’ by The Mamas and the Papas, He Went to Paris by Jimmy Buffett, London Calling by The Clash, Memphis by Johnny Rivers, Memphis by Elvis Presley, Margaritaville by Jimmy Buffett, Maybe it Was Memphis by Pam Tillis, New Orleans Ladies by Le Roux, Streets of Philadelphia by Bruce Springsteen, Sweet Home Alabama by Lynyrd Skynyrd, Sittin’ on the Dock of the Bay by Otis Redding, Chevy Van by Sammy Kershaw, Monday, Monday by the Mamas and the Papas, Born in the U.S.A. by Bruce Springsteen, Wichita Lineman by Dwight Yoakum, Stays in Mexico by Toby Keith, Last Train to Clarksville by The Monkees, The Night the Lights Went Out in Georgia by Reba McIntyre, Daniel by Elton John, Hotel California by The Eagles, Amarillo by Morning by George Strait, Omaha by Counting Crows, Girl Like You by The Smithereens.