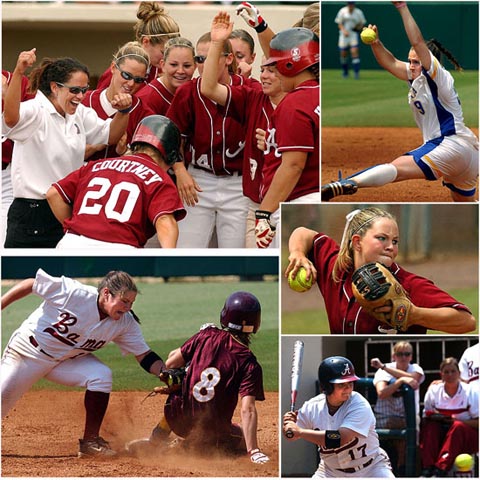 Song of the South

If I were any more steeped in Southern culture this weekend, I believe I’d have sweet tea oozing from my veins. And yes, you read that right. “Sweet” tea. Ask a Southerner for “sweetened” tea or “iced” tea and you are likely to be answered with a quizzical look and a slow, “Y’ain’t from ’round here, are ya?”

Just as the perfect syrupy concoction of sweet tea is a quintessentially Alabama experience, so are two of my other weekend indulgences — UA softball and Dreamland ribs. Oh sure, softball is played all over the United States, and I suppose every city has its version of barbecued ribs, but Tuscaloosa has a way of putting its own unique spin on things. Alabama has its share of problems, but on weekends like this I am proud to be Southern-born and Southern-bred, even if I do have more than a trace of an accent that stubbornly refuses to be silenced.

As I stood out in the hot sun today, shooting the game for The Associated Press and reveling in the sights and smells around me, I imagined what it would be like to take a friend on a tour of my city — someone who has never been here before and knows nothing more about Alabama than a hodge-podge of stereotypes gleaned from hearsay and television. I imagined sitting in my favorite spot on top of the dugout, legs dangling, eating hot dogs while keeping an eye cocked towards second base. I would laugh as the sun beat mercilessly down, saying, “You think THIS is hot? Wait until you’ve lived through an Alabama July, then tell me you couldn’t write your own ode to the “dog days” of summer.”

I imagined sneaking a friend into the press box with me, that sacrosanct area that I take so much for granted but that remains a mysterious no-man’s land that most “private” citizens will never see. I imagined bringing a friend home with me to cool off and rest a bit while I made my routine mad dash to Photoshop and caption images for three different newspapers before their respective deadlines.

Afterwards, as was the case today, there might be a feature still to photograph for the local daily and by this point we would be hungry, so of course I would take my friend along with me to Dreamland, a hole-in-the-wall with a well-deserved reputation as a tourist mecca. We would pull up to the non-descript building, enter the dark, smoky bowels of this legendary place, and my friend would say that surely tourists were not even able to FIND this dive, let alone seek it out. But of course, I would prove him wrong by photographing the perfect two patrons, two Bronx natives on their way home for the semester from Stanford Law School in California who had read about the restaurant in a travel book and somehow managed to make their way down the narrow, curving road to heaven on a plate.

And at the end of the day, bellies full and minds relaxed into a slow, liquid languor, we would sit out on my porch, sipping cold beer and listening to the cicadas trill as heat lightning flashed across the night sky. “Pretty good weekend,” I would say. And if I had accomplished my mission, my friend would nod in silent assent.

Site News: Archives have been updated, for those who have been complaining about not being able to find anything 🙂 I will try to stay on top of them each day from now on. Also, I am considering a site redesign, so now is the time to put in requests which will be honored in accordance with my HTML skills. Any thoughts/suggestions would be greatly appreciated.

Music of the day: Song of the South by Alabama (lyrics)