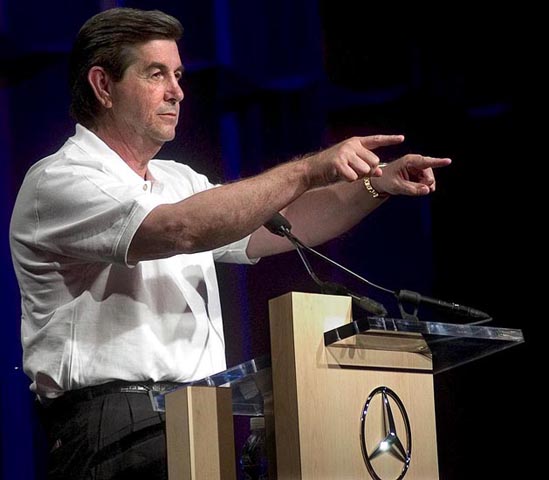 Alabama Governor Bob Riley points to employees of Mercedes-Benz U.S. International as he congratulates them on their past year’s performance during a press conference May 3, 2005 at the plant in Vance, Ala. The company unveiled its new $600 million expansion during the event, which was attended by more than 5,000 people. (Photo by Carmen K. Sisson/Freelance for The Mobile Register)

This assignment was a surprise, coming in late this afternoon from The Mobile Register and making the fourth assignment I have shot for them this month. I would have liked to have gotten something other than a podium shot, but I had to squeeze this shoot in between two others, so there was not much time to hang around and hope for something better.

As it was, I spent more than an hour at the press conference, listening to the speeches. I lucked out when the governor made this gesture, making it a little more interesting than it would have been otherwise. Mercedes has been good to our state and especially good to our area. Besides providing jobs and boosting the economy, the company has added a bit of much needed multi-culturalism to Tuscaloosa and brought a renewed sense of pride to Alabama. Out of all the states they could have chosen for their first and only U.S. plant, they chose ours.

For a state that is usually near the bottom in everything, that was quite an achievement.

Music of the day: Fine Again by Seether (lyrics)