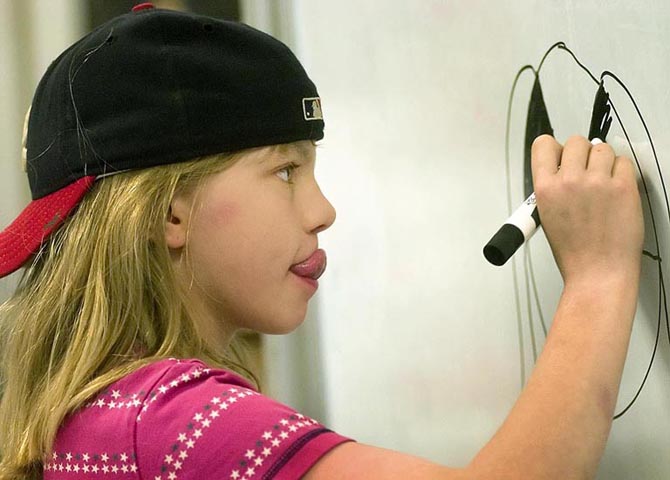 This photograph is a good example of how attitude can make all the difference in the world.

I shot this last week as a routine feature assignment for The Tuscaloosa News. Originally, the assignment called for me to shoot the local elementary school’s annual “Water Fun Day,” which two years ago resulted in the image you see in the rollover.

Ordinarily, photographers don’t really fight over these types of assignments, but I sort of like them sometimes. They are a nice change of pace and can result in something nice if you have the time to wait them out. In this case, I didn’t have a lot of time. I had an assignment immediately following, meaning I would have about 45 minutes to shoot. The photo was slated to run inside in black and white. Not the stuff dreams are made of.

Still, I walked through the double doors of the school determined to come back with a nice image like the ones Mark Hancock routinely brings back to his paper.

My hopes were immediately dashed when the school secretary informed me that the assignment sheet was wrong — the Water Day had actually occurred the day before. My first instinct was to curse everyone who has ever wasted my time with an incorrect assignment sheet (which happens at newspapers across the country astonishingly often). Then I remembered why I was there — the education page would need an image on Sunday and it was my job as a photojournalist to provide that image, if I had to dig one out with my teeth.

It wasn’t about me. It was about the readers. So I asked the secretary if perhaps another event was happening at the school that day that might be visually interesting. She didn’t know of anything. Neither did the next teacher that she asked or the next. Finally one mentioned a fourth grade talent show taking place miraculously enough at that very minute. I was out the door before they could even give me directions. Time was ticking and I had a talent show to shoot, now with only about 30 minutes to spare.

I entered the room and patiently started shooting each act. There were little girls playing the piano, a boy playing a violin, and several students who recited poems, short stories, and various words in different languages. I wasn’t getting much. I made my shots and took down names, but I was more than a little discouraged. I would be handing in another lackluster feature.

Determined to do better, I turned off my flash and started shooting available light. Hmmm. That was much nicer. I switched from wide angle to telephoto. Nicer still. There was only one act left, and when she announced that she would be drawing, I couldn’t help but sigh. Drawing. How visual could I make that? I liked her backwards hat though, so I framed her tightly and started shooting.

And then the photo gods rewarded me for my diligence. At first I couldn’t believe my eyes. Was that really the hint of a little pink tongue sticking out as she concentrated on her drawing? Yep. Sure was. I moved a little closer. Since I wasn’t shooting with flash, she didn’t even notice me. And although the photo wasn’t a prize winner or even a portfolio piece, it was a decent effort from a fairly mundane assignment.

When I went up to talk to the artist and gather caption information, she told me that she was equally talented at acting and drawing. “If my acting career doesn’t take me anywhere when I grow up, then I’m going to paint portraits and write plays,” she told me very seriously.

I couldn’t help but smile at her pluck. When I was in the fourth-grade, I planned to be either a writer or a veterinarian. Dreams change. But I still write almost every day and my cats bring me just as much joy as I imagined a career with animals would offer.

As I walked out of the school, camera slung over my shoulder and whistling a Tom Petty tune, all seemed right with the world. Things don’t always turn out the way you think they will. And sometimes that ends up being better than what you could have imagined.

Music of the day: Changes in Latitudes, Changes in Attitudes by Jimmy Buffett (lyrics)

Favorite photos: There have been a lot of nice ones this week, and I am a little late mentioning them, but I would be terribly amiss if I didn’t point out Kissing Couple by Miles at Mute and Stubborn and Relentless by Kendall at Invisible Threads. Incidentally, in the interest of disclosure, I did not discover either of these on my own. They were the favorite shots of the day by Andy at SensorChip and Dave at East3rd, respectively. And for my own link, I humbly submit Dirty Laundry by Michael at A Day in the Life of Me.