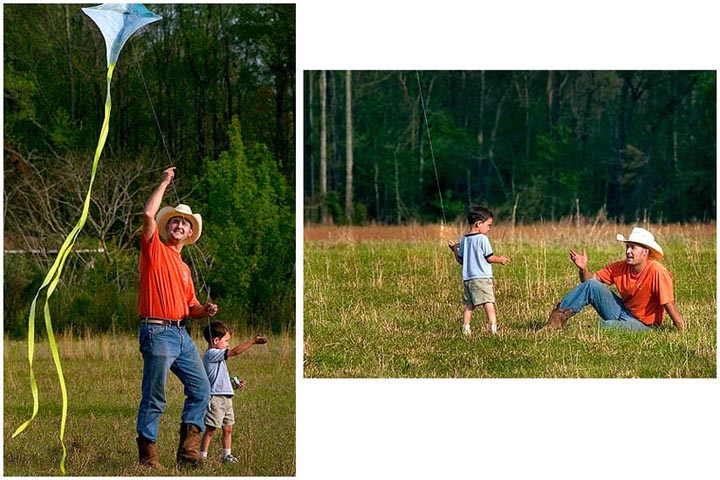 It has been a while since I have been to the Moore’s Bridge community in north Tuscaloosa County. I used to make the 30-mile drive a lot when I was an editor. I felt that it was important to get out into the rural areas, get to know the people who read my paper, find out what they cared about and try to capture those things in its pages. Some people would say I succeeded.

We won a slew of awards, tripled our circulation, and managed to stay in business despite having to compete with a New York Times-owned daily less than a mile away. Now my paper rests in other hands and I turn the pages each week wondering whether anyone still cares about the people of Moore’s Bridge, Samantha, Coker, New Lexington, Sterling and all the other tiny, out of the way places that I took such delight in discovering.

Today was evidence that though these communities may be forgotten by the paper, their inhabitants have not forgotten it. On a whim, I decided to photograph this father and son as a standalone feature for The Tuscaloosa News, where I am currently contracted as a freelance photographer. I did not remember the family, but they remembered me. I had photographed the little boy’s grandfather almost five years ago on a very similar Sunday afternoon feature hunt.

Standing in the field, with the sun in my eyes and the smell of grass in the air, I wondered why I ever left. I thought I knew what I was doing at the time. My paper’s publishers had employed a city councilman to cover his own council’s meetings, which I felt was a conflict of interest and a disservice to our readers. When I spoke out against their decision, I suddenly found myself on the wrong side of management with my name splashed across headlines in The Tuscaloosa News, Columbia Journalism Review, SPJ.org, and elsewhere. I was given the choice to resign or be fired. I resigned.

It was a dark time. People lauded my decision but I cringed every time someone called me a hero — a martyr for journalism. I felt like I had thrown my paper to the wolves, abandoned the readers who had placed their trust in me. I still feel that way.

But every once in a while, like today, I look up from my camera to see my old life and my current life intersect. It’s an odd feeling, like looking into a mirror and seeing a shadow of yourself.

I don’t remember the girl I used to be, can’t find that fearless spitfire of an editor who hedged a bet and lost, but maybe that’s a good thing. I don’t have much left that I can afford to lose.

Music of the day: The Gambler by Kenny Rogers