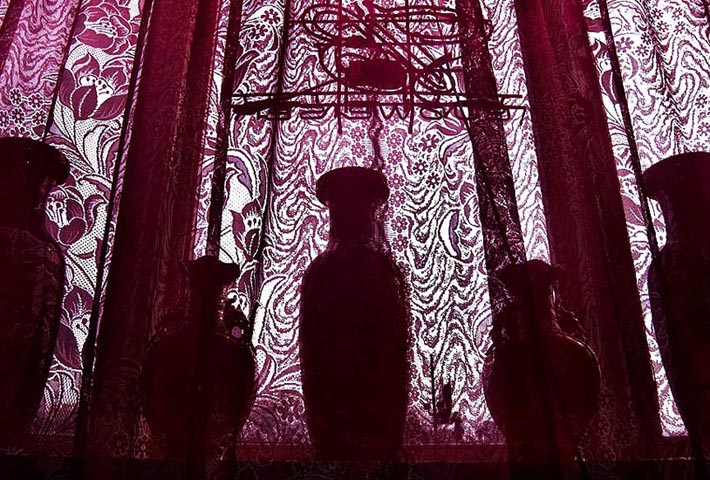 This isn’t a typical image for me. A year ago, I wouldn’t have even take my camera out of the bag. But things change. People change. Things change people.

In an effort to try something new, Nicholas and I decided to eat lunch at a local Vietnamese/Thai restaurant. As the waiter brought menus to the table, I was distracted, captivated by the light pouring through these red curtains. It was beautiful, like the portal to another world. Giving in to the temptation, I began shooting. The light was harsh and I had a hard time getting my exposure correct. I wanted to blow my highlights since that was a closer approximation of the scene, but I wanted to capture the detail in the curtains too.

As I was pondering the situation, the waiter returned. He was an elderly Vietnamese man with proud eyes and a kind smile.

“You like my vases?” he asked in halting English.

His eyes lit up with delight as he offered to open the curtains for me, to show me some of the other vases in the restaurant. He was fascinated by my camera and wanted to talk about photography. His accent was thick, and he was difficult to follow. I listened anyway. He told me that he likes to photograph trees standing alone in a field, cows lying in a pasture, life distilled to its most basic elements. I smiled and told him that I liked to photograph things like that too. He seemed surprised, pleased that we shared this interest.

As I looked into his eyes, the smile creasing the wrinkles on his brown face, I was glad I had taken a few minutes to photograph his vases. It is not a stellar photograph. In all likelihood, it will never see publication beyond this website. But it meant the world to that man because I took the time to appreciate something that he loves, to ask a few questions and to listen, really listen, to the answer.

This is all people want really. To be “gotten.” To be understood. To be seen. To be heard. To exist for a few minutes in someone else’s eyes. I hope I was able to give that to him.

Music of the day: So Far So Good by Thornley (lyrics)

Sooner or Later by Breaking Benjamin

Hang On by Seether