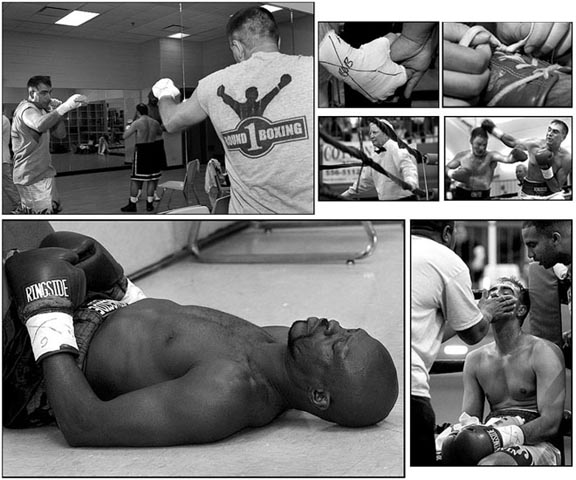 Sorry for the late update. I am posting this from Barnes and Noble in Birmingham following shooting the Alabama high school basketball playoffs earlier in the day. I will post photos from that shoot later on tonight. The pictures are from the boxing match I photographed last night for Boxing Digest.

There are not many fight photos because shooting at 1600 ASA f/2.8 only gave me 1/100 second — not nearly fast enough to capture decent action photos. I think the only way to adequately shoot this would be to mount strobes in the ceiling rafters, but the fight organizers wouldn’t allow that. If I shoot for them again, I think I’ll see about getting a fast 50mm or 85mm. As it is, I made just enough money to purchase a second SanDisk Ultra II 512MB card to replace the one I lost a few months ago.

All in all, the match was more interesting than I expected it to be, especially since I was given free rein to wander wherever I wanted. I decided to focus my efforts on this guy because he was the nicest of all the fighters I met. As I hovered over him, focusing my macro lens on his gloves while they were being laced, I asked him if I was bothering him.

In typical Alabama fashion, he replied, “Shoot, no ma’am. You can’t make me much more nervous than I already am. You go right ahead.”

We talked a little and I shot a lot. At one point during the match, I almost had to turn my head. He was getting his butt kicked, and I was standing close enough to be splattered with his blood. Sweaty and heaving, he looked like he was going to throw up. I felt sorry for him. For a split second, our eyes met and I smiled the warmest, most reassuring smile I could muster. I’d like to think I had something to do with the fact that he rallied just seconds after that, turning the tables on his surprised opponent, but I somehow doubt it.

Nevertheless, afterwards he came to thank me and say goodbye. I thought that was pretty cool and well worth the price of a smile.

Music of the day: Bring Me to Life by Evanescence