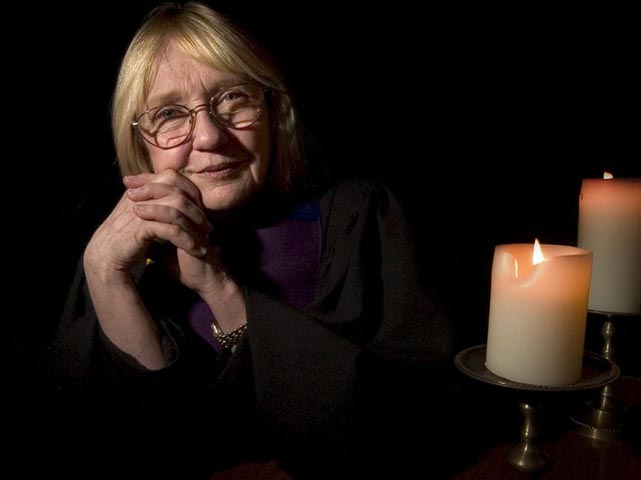 ORIGINAL POST: This was from an evening assignment about female ministers. The photo that will run in the paper will not have such a dark background as the severe burning that produced it is not considered ethical by the standards of the National Press Photographer’s Association and could be grounds for dismissal.

The original photograph has a disturbing shadow on the wall, courtesy of improper lighting and shoddy technique. I didn’t quite get my flash right. I am still working on lighting skills and it’s frustrating sometimes. Basically, I lit my model very similarly to the bell pepper a few days ago 🙂 It turns out that people are not really like bell peppers. They wear glasses that leave rim shadows and clothes made of strange materials that break up in low light. If anyone can tell me what I am doing wrong in this department, or how I can fix it, please let me know.

The lighting setup basically involved my SB-28 on camera set at 1/64 power. Basically just enough flash to avoid the red glow on her face caused by the candles and to force the SB-26 to flash. I held the SB-26 above my head to the left, pointing down at her face. Unfortunately, this caused the shadows from her glasses and the shadow on the wall. Mark Hancock’s suggestion to snoot the flash probably would have avoided the shadow on the wall, but I am not sure what I could have done about the glasses. I will have to experiment with snooting as I have never tried it.

I was probably a little hard on myself when I posted last night. I can be that way sometimes, especially if I am very tired. The one thing that I can say is that I made an effort to do something different, to go a little above what was required. I have not been doing that much lately, and it shows in my work. It doesn’t make me feel better about myself.

The assignment called for me to photograph this minister speaking at a podium during a Lenten service. In fact, the actual assignment asked for me to “catch her gesturing or something.” Gee, thanks, I wouldn’t have thought of that. Sarcasm aside, podium shots are just not all that interesting unless you can catch a great expression. Add to that the fact that the church was dimly lit and no flash was allowed, and you have a bad assignment going worse.

I stuck my 80-200mm lens on my camera, pushed it up to 1250 ASA and opened the aperture to 2.8. That gave me 1/30 second. I could have, and should have, used my tripod. Instead, I rested the camera on the back of a pew and held my breath as I snapped each frame. It worked out okay. But still, this was for the Life section, which means it would be a fairly big spread. I didn’t want a four-column podium shot. I watched for any unusual expressions or gestures, but there weren’t any. She spoke for 10 minutes and sat down.

But that is an entirely separate tangent for another day. The issue at hand is RainKing’s question of why it would be unethical for me to give the paper the image I Photoshopped for the website as opposed to the one which I actually transmitted.

It’s a murky area, and possibly even moot in this case, but I try to err on the side of caution. The standard rule when working for newspapers is that anything allowed in a traditional darkroom, ie. dodging, burning, cropping, birghtness/contrast, is fine. Basic levels, sharpening, and color balance tweaking is okay in order to get the scene to more closely match what was there to start with and to overcome the limitations of digital capture. Anything above that is unethical and grounds for dismissal.

I have been a paying member of the National Press Photographer’s Association since 1999, and have been an active participant in the NPPA mailing list longer than that. Like most photojournalists, I strictly adhere to the NPPA’s Code of Ethics and Digital Code of Ethics. The NPPA has several pages of information here.

Basically, the code of ethics for shooting states that we will be accurate and fair. We will not “stage” photographs and we will resist subjects’ attempts to make us break this rule. If we pose a photo, it must be clear to the reader and leave no room for deception. We will attempt to shoot free of all stereotypes or biases. We will treat our subjects with compassion and dignity. We will intrude on victims of crime or tragedy only when the public has an overriding right to know, NOT just to shoot the award-winning portfolio image. We will not contribute to, alter, or attempt to alter news events. We will not manipulate images in any way that misleads viewers or misrepresents the situation. We will not pay subjects or reward them (ie. with prints, etc.), for information or participation.

Likewise, we will not accept gifts, favors, or compensation from subjects. For me personally, this means that I do not eat or drink at events, no matter how many times it is offered or how hungry I am. No free tee shirts, autographed books, signed CDs, or tickets. This comes up as an option at almost every event, and I have seen many people dig a hole for themselves later by accepting. Nothing in this life comes free. NOTHING. Those strings that tie you today might very well be the ones that strangle you a few years from now.

The digital code of ethics is something that varies a little from paper to paper. Because of the Jason Blair incident, NYT is understandably careful about ethics these days. Many of you have expressed confusion over why the original picture would be okay but the edited picture would be unethical. The reason is that I could not achieve the darkened background by simple burning, which is okay. It required selecting specific areas and taking the levels down to zero. In some cases, cloning was necessary to completely remove all traces. Moving, or removing, pixels is NOT acceptable. The reader needs to be able to trust that what he or she sees in the paper is real.

While blackening my background doesn’t really change much about the photograph, it does alter reality. Where was the top photograph taken? Perhaps in the studio? The original photograph shows the reality. There is a brick wall behind her, a plant. The reader can conclude that this was most likely taken at the church. In the words of journalism thinktank Poynter Institute, such severe burning — the so-called “Hand of God” technique” — is wrong because it removes “secondary information that may have helped — or been central to — the viewers’ understanding of content and context.”

It is not enough to write the truth in the cutline. The reader may simply scan the picture and turn the page. They MUST be able to get the accurate version of reality on first glance, without having to dig for the truth.

While my case is somewhat trivial, the point is that you must establish a line. A line that you never cross. Never. Because it is too easy to go a little farther each time. It doesn’t matter if power lines mess up the mood of your picture. You can’t remove them. Period. It doesn’t matter if you set your flash wrong and your subject is casting a ten foot shadow on the wall. You can’t remove it. Period. FOR THE NEWSPAPER. That is one of the cool things about this website. I can tweak photographs however I want because it is for my enjoyment and this is my personal website. I still do not alter the photographs in my professional galleries because they are just that — representations of my professional work.

Technically, you could argue that perhaps I shouldn’t alter any photograph that I have taken for journalism purposes, even if I am only showing it on the front page/photoblog section of this site. That is something I had not considered until now. It has been fun to do things with my work images that I couldn’t do for the paper, like bump the saturation on this one and selectively color this one. I will have to reconsider my position on whether that is ethical. At the moment, I am thinking it’s not.

In terms of photoblogging, anything goes, and you all know that I am not above playing with Gaussian blur, hue/saturation, and all the other fun things that Photoshop does. In fact, this website has given me permission and incentive to explore parts of Photoshop that I have never used. Because I shoot for a lot of different purposes, it is good to learn new things. I think it makes me more well-rounded as a photographer. I just don’t do it when I’m shooting news.

Anyway, I am sorry that this was so long. I really didn’t want to get into an extended discussion about journalism ethics because, quite honestly, I don’t feel that I am qualified to speak for the profession. As always, remember that this is just my opinion and my understanding of what I have been taught. A quick search for “photojournalism ethics” will bring you hundreds of articles by true professionals. People who are paid to dissect this stuff. As for me, I just try to take the high road when I can and walk away when I can’t.

Music of the day: Sunshine Mix: Sunshine on My Shoulders by John Denver, Slip Sliding Away by Simon and Garfunkel, Rhinestone Cowboy by Glen Campbell, The Most Beautiful Girl by Charlie Rich, Sundown by Gordon Lightfoot, More than Words Can Say by Leo Sayer, Lyin’ Eyes by The Eagles, Heart of Gold by Neil Young, Chevy Van by Sammy Kershaw, Kiss You All OIver by Exile, I Can’t Tell You Why by The Eagles, The Gambler by Kenny Rogers, The Devil Went Down to Georgia by The Charlie Daniels Band, Two Out of Three Ain’t Bad by Meatloaf, Dust in the Wind by Kansas, Brandy by Looking Glass, Memphis, Tennessee by Johnny Rivers, Let Your Love Flow by The Bellamy Brothers, Sister Golden Hair by America, Ode to Billy Joe by Erin Hay, Smoky Mountain Rain by Ronnie Milsap, Take Me Home Country Roads by John Denver.