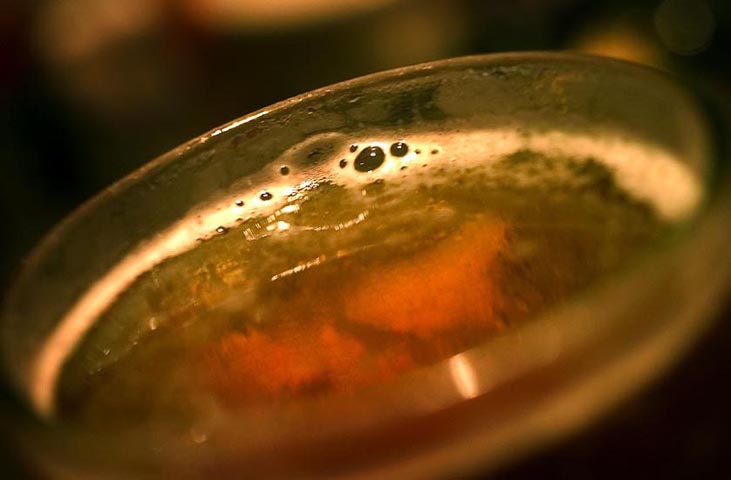 Playing with my Food

You know you’re a photographer when the only reason you agree to go to dinner is for the opportunity to photograph your food, or in this case, your companion’s Samuel Adams. Nicholas and I haven’t gone out much lately, but a recent influx of income and the impinging arrival of Lent inspired a short trip to O’Charley’s and Books-A-Million. (For those who are confused, Greek/Russian Orthodox Lent begins March 14 and requires a strict abstinence from meat, eggs, dairy products and, ahem, lots of other fun things for 48 days.)

Nicholas was anxious to have a steak and our mutual favorite, the 900-calorie a bowl loaded potato soup. I was in need of a photograph to post and somewhat amenable to the concept of fresh air after being inside all day.

During dinner, our conversation turned to the concept of being passionate about what you do, whether it is waiting tables or working in a bookstore. Although we are each pursuing our passions now, we were once equally as passionate about the jobs we held when we first met.

He was a waiter/night manager at the International Deli and Pub and I was a 19-year-old photojournalism major, working dayshift in the college photo lab and night shift at Books-A-Million. Even though we weren’t exactly living our dreams, we had a passion for our jobs and it showed in everthing that we did.

I am drawn to passion — drawn to people who live their lives fully, who are just as intense as I am and will match me, challenge me, inspire me, make me think. When I met Nicholas, it was instant attraction, and I realize now that much of what I saw was his love for his job.

He always seemed to be a step ahead of me, anticipating my needs before they had even taken shape. On the first night that we met, he sensed my loneliness and stopped to speak, engaging me in a conversation about cats after noticing Boogie’s photograph on my key chain. On the second night that I appeared, he remembered my order from before — coffee, straight up and steaming hot. By the third and fourth visits, he had noticed that I usually ordered my coffee, then went outside to buy newspapers from the racks — The Tuscaloosa News, The Birmingham News, and USA Today, with the addition of The New York Times if I had enough money on Sundays. He started bringing an armful of newspapers with him to my table each night, presenting them with a flourish as he handed me my coffee.

If I was there for a few hours, he would bring me a grilled cheese sandwich in case I was hungry. If I seemed to have a headache, he would bring me an aspirin. If I looked tired, he would tell me I should go home and try to sleep. He saved my favorite table on busy nights, in the darkest corner with a good view of the room and whatever band was playing, and made sure the other waiters knew that I was his customer, no matter where I sat. And always, always he kept a watchful eye on me. If a guy tried to hit on me, I only had to look in his direction for him to magically appear and make him go away. And if I seemed to be enjoying the attention, he would just smile and wink, staying out of the way.

I used to wish that I smoked just so I could have him bring me my favorite brand or lean over to light my cigarette like he did for the other girls. He was everything to everyone.

I was the same at Books-A-Million. I loved being able to read the customers, anticipate what book they would ask for before they even knew what they wanted. I loved being able to walk straight to the shelf and, without even looking, lay my hand on the title and place it into the hands of the astonished patron.

People would ask for obscure things that would drive the other clerks insane — “Yeah, there’s this book I heard about on TV…I don’t know the title or even what it’s about really but it sounded pretty cool. I think it’s kind of small and maybe blue.”

I always knew which book they wanted. I stayed on top of the industry, read the company newsletters, listened to the conversatons of customers in the check-out line. I liked being the one with the answers. I liked solving problems. I liked being good at what I did. It was a game, and I liked the thrill of being able to pull a rabbit out of the hat one more time.

I am still like that. Tell me you need me and I’ll give my life to you. Give me a project and I will pursue it to the ends of the earth. Tell me it can’t be done and I will die trying to prove you wrong.

I look around and no one else seems to be that way. The clerks in the bookstore, the waiters in the restaurants, the people on the streets — they all seem to be in a trance. Expressionless, they walk past me, killing time until they can clock out for the day. If they are thinking of anything, I can’t tell. I don’t know if they are happy or sad, if they just bought a Ferrari or if they are going to go home and shoot themselves.

At 3 a.m., everyone pays a price for the choices of the day. Sometimes it’s worth it. And sometimes it’s not.

Music of the day: Round Here by Counting Crows

Save a Prayer by Duran Duran