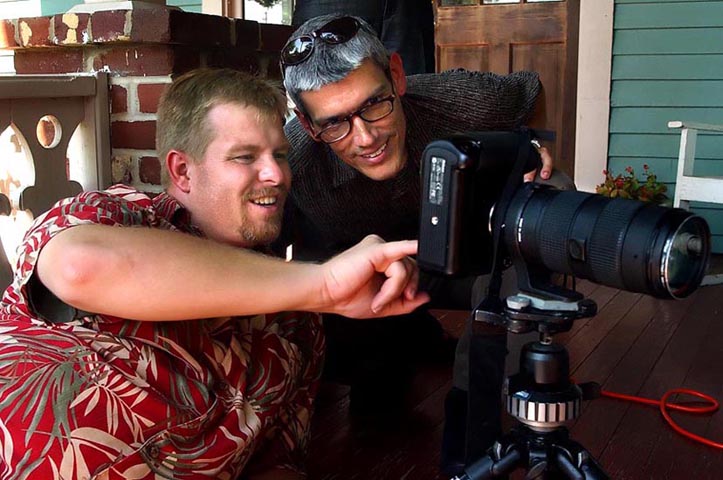 This image is for Sarah, who chose “fellow” as her word for the day to have me shoot. It’s not a new image — it was actually taken July 15, 2004 — but it suits the word so well that I had to post it. These are my friends and fellow photographers, Robert (left) and Porfirio (right), looking at the monitor of a Nikon D1X while doing a shoot for the newspaper’s “Life” section.

As an only child, I always wished for an older brother — someone to look up to, someone to believe in. When I became a photographer, I suddenly discovered an entire fraternity of “brothers,” a secret society of like-minded shooters who were always willing to offer advice, share equipment, or spend a few hours talking tech talk at the local sandwich shop.

When I had to walk down into a steep ravine late one evening to shoot a dilapidated storm shelter where a dead body had been found, it was Porfirio who answered my frantic phone call — driving as fast as he could to get there just to walk beside me so I wouldn’t be afraid. When I had to climb up a ship’s ladder and hoist myself onto a roof, it was Robert who coaxed me up the narrow rungs and hauled me onto the roof through the narrow hole in the ceiling. When I didn’t have a lens to my name, it was Porfirio who loaned me his 17-35mm and his 300mm until I could buy my own. When I was a mixed-up photography student in college, it was my classmate Robert who always took the time to stop and ask me how I was and really listen to the answer. When I quit my job as an editor and sat pondering my future, it was Porfirio who called and offered me a job. When I accidentally stole an account from another photographer in town, it was Robert who introduced us and gave me a new friend. When I got my first big commercial job, it was Porfirio who loaned me his White Lightnings, then came to the shoot and showed me how to use them. And when an error in judgement put my reputation on the line, it was both of them who defended me. They are best friends to each other and they have been good friends to me as well.

There is an instant kinship among photographers, an easy rapport that is hard to describe if you have never experienced it. Out in the field, we are all competing against one another, trying to be the first to get the “money” shot, trying to win the award, trying to outsmart, outshoot, outwit the others. But drop a lens or lose a flash card and watch them scramble to come to your aid. Some would say that it’s because I’m a girl. And maybe my experience has been different. But I have always felt taken care of, felt safe, felt secure, felt happy among my colleagues. I would give my life for them, and I don’t doubt that they would do the same for me. We don’t see each other so much these days. Everyone is busy, and things are different now. Porfirio is freelancing in Miami, and Robert is tied up in the day-to-day challenges of being a photo editor (and my new boss). There are no long lunches at Subs-n-You, no nights like the one when we all went to see Spiderman 2 together. Times change. People change. Situations change. But somehow I have the feeling that brothers, even imaginary ones, last forever.

Music of the day: One by U2