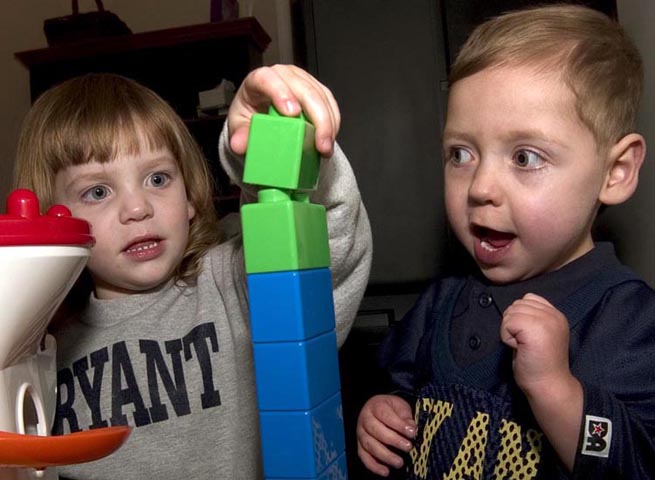 These twins seem like typical three-year-olds. They laugh and play, fight and cry, just like ordinary children. But for the little boy, life has been anything but normal. He was born with Hypoplastic Left Heart Syndrome and has spent more time in hospitals than on playgrounds. He is an active, happy child, babbling with his sister in a language only they understand. He loves Shrek and The Wiggles and imitates football plays on television, much to the delight of his father, who is a coach at the local high school. With any luck, he’ll grow up to play on his father’s team, walk down the aisle at his sister’s wedding. He is slated to undergo his third open-heart surgery this summer, but his parents aren’t worried. He has already beaten miraculous odds, thanks in part to the Arkansas surgeon who saved his life.

By all accounts, Dr. Jonathan Drummond-Webb was somewhat of a miracle himself, repairing complicated defects in hearts as small as an adult’s thumb. He was a ruthless perfectionist, demanding the best from himself and his colleagues, with a two percent mortality rate of the 830 operations he performed. His skills earned him a four-part television documentary and almost $600,000 per year. But his real talent was with the patients themselves, spending time to cheer them after their surgeries, explaining the complicated procedures in layman’s terms for their frightened parents. As much love as he gave, he received.

Dr. Drummond-Webb killed himself on Christmas night, chasing a lethal dose of oxycodone with a bottle of bourbon.

His colleagues said he had seemed depressed lately, that while some surgeons would celebrate saving 98 out of 100 lives, he could only see the two lives he had lost. Others said his death came as a shock, especially following on the heels of his most recent miracle — the first successful transplant of a lifesaving miniature heart pump in a child. The 14-year-old, who was released from the hospital on Thursday, said he talked to him on Christmas Day and he seemed fine.

I never saw the obituary in the paper, had never heard of the famous doctor who cared more for his patients than himself. But as I sped through the darkness to meet the recipient of one of his miracles, he weighed heavily on my mind. Tomorrow, this photo will grace the front page of the paper. Some people will read the story, others will shuffle past it on their way to the sports section or the comics. There will be no joy from my six-point credit line, no rush of pleasure as the story and photograph is carried by the wires to thousands of newspapers across the nation.

He was able to save everyone’s life but his own, fix every heart but the one he chose to silence.

Thirty-eight pages of condolences are strewn across the internet. Family, colleagues, and patients are grief-stricken, confused. Would it have made a difference if he had known how much he was loved? Was the thing that made him excel the same thing that made it impossible for him to accept his own very human failures? No one will ever know. No one can ever truly know the dark hours people go through in the middle of the night. No one can ever truly understand the desperation, the mind-numbing exhaustion, the incessant allure of nothingness. An end to the self-recrimination. An end to the doubt. An end to the pain. If he had walked just a few short steps, he could have been in the arms of his wife or holding his beloved cat, Zucchi. There are counselors and hotlines, support groups and self-help books.

Music of the day: The World I Know by Collective Soul

The Sound of Silence by Simon and Garfunkel

The Man Who Sold the World by Nirvana

Put Your Lights On by Santana and Everlast